Nominated MP Maina Kamanda has admitted that there indeed has erupted intense infighting among Mt Kenya allies of ODM leader Raila Odinga regarding who should be his running mate next year.

This comes at a time when the former Premier is under pressure to pick his deputy from the region, with pundits arguing that he must cave in to the pressure for the sake of the vote it has to offer.

Kamanda has said that the fight is indeed there, but says that one of the proposed names; that of former Gatanga MP Peter Kenneth, is the most likely to appear alongside Raila's in the ballot paper next year.

This, he says, is because his (Kenneth) Murang'a backyard has been the most vocal in drumming up support for the veteran politician's candidacy, adding that as a result, he is ahead of the pack.

“First, the people of Murang’a, starting from the Mau Mau days to Kenneth Matiba, have suffered a lot for this country. Secondly, Murang’a is the only county in Central Kenya that has been actively and openly involved in Baba’s (Raila) campaigns,” he told the People Daily. 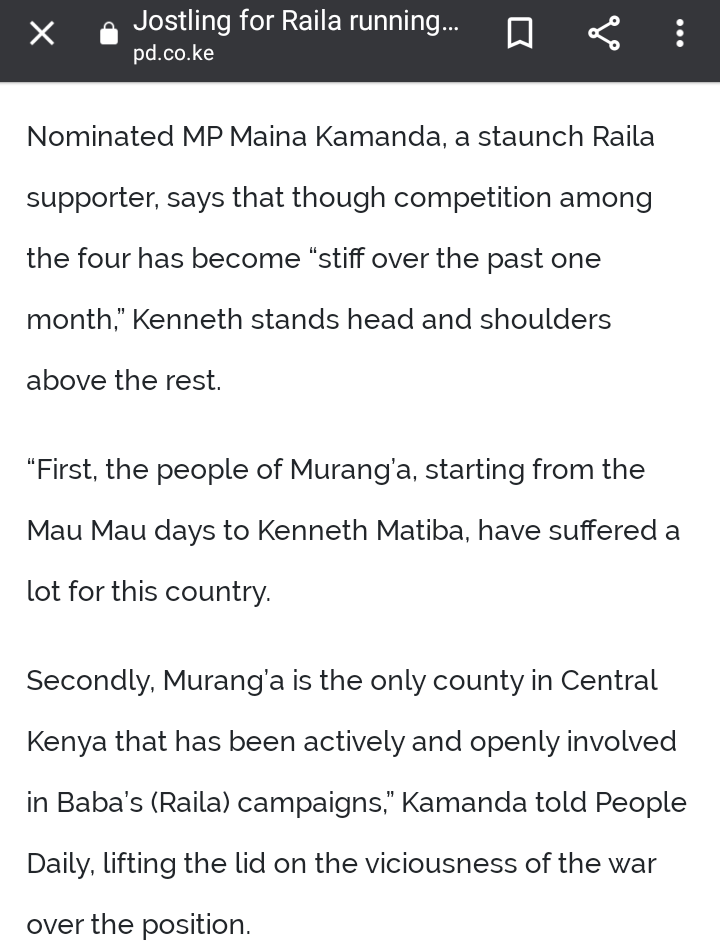 The paper was told that Kenneth is most likely to scoop the position, as he enjoys the backing of the Mt Kenya Foundation and close allies of President Uhuru Kenyatta like Jubilee Vice Chair David Murathe.

Those who want him to take the position argue that it is time Murang'a led, given that the county has never had a president or a deputy since independence despite its role when it comes to such elections.

Nyeri Town MP Ngunjiri Wambugu also acknowledged the hot race for Raila running mate slot, adding that it has been intensified by the fact that whoever gets it will succeed Uhuru as the next kingpin of the larger Mt Kenya region.

"So you will see many people jostling for the position, including fighting each other. But whoever gets the post is likely to be automatically accepted in the region, and must be trusted by the people and the President,” the lawmaker told the paper.

But earlier reports indicated that on top of the mentioned leaders, the MKF had also proposed the names of Royal Media Chairman SK Macharia and Equity Bank CEO James Mwangi for the same post.

Raila is expected to name his running mate in February next year after launching his 2022 bid.