By Branny (self media writer) | 1 month ago 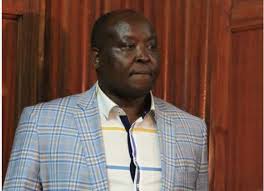 This follows after 27th June, when he named as one of the persons of interest in the matter of the 'confimed' dreaded gang in Nakuru which was armed and was causing in security in the Area. Bahati MP Kimani Ngunjri and David Gikaria of Nakuru Town East were also named. More than 3o suspects have since been arrested and crude weapons in an operation that was carried out.

The Nakuru West MP was also alleged to have forged a land sale agreement in respect to a piece of land belonging to Nisar while purported to have been signed by Yusuf Mustafa Ratemo. During the hearing of the case, it emerged that the document which claimed the MP had bought the percel from Ratemo at a cost of Ksh. 60 million was not authentic. The court heard that the latter was not the owner of the land in question.

Arama was found guilty of abusing his office and authority to fraudulently acquire a piece of land in municipality block 6/ 95 by displacing A Muhammed Nissar Ahmed.

The Legislator was sentenced after the court found him guilty of froud. He was however given an option of a Ksh of 1.5 million fine.

Pastor Visits an Old Woman at Odd Hours, Leaves her Dead Before Running to an Unknown Destination