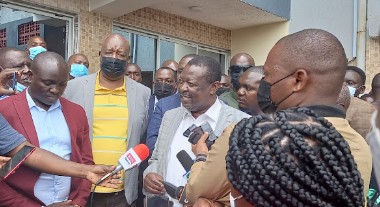 Amani National Congress party leader Musalia Mudavadi has called upon Kenyans to brace themselves for a major announcement that will shake the country like a tsunami on Sunday January 23rd when the ANC party will have its National Delegates Congress.

As quoted by the Star, speaking on Sunday after attending a church service in Nyamira County, Mudavadi said that his eyes are set on the presidency, dismissing claims that he is gravitating towards Deputy President William Ruto's side.

"I have heard people saying I am slowly moving out of OKA, just wait. There is a major announcement that will shake the country, there is no need for doubts.

We also do not want to pre-empt what we have discussed in Nakuru as the leaders of ANC. But we will give a major declaration that will be like an earthquake on our way forward politically," he said.

His remarks comes two days after reports surfaced that the One Kenya Alliance technical committee had settled on Wiper leader Kalonzo Musyoka as the preferred flag bearer ahead of the August elections.

The OKA leaders who attended the Elementaita meeting Kalonzo, Moses Wetangula and Gideon Moi termed the reports as 'speculations' that were being propagated by social media users.

Kenya's Longest-Serving Female MP Who Has Never Lost an Election

Another challenge that Ruto should be worried about ahead of the August polls. Opinion