Gidion Moi's entry into Presidential race last week is likely to change the Politics in the rift valley.

The region has been perceived to be the deputy president William Ruto's political bedrock for some time now.

Finally Ruto's hustler nation wave has a competitor at home. Gideon had promised to state his promises to kenyans when he will finally launch his presidency.

At bomas on Thursday, the invited guests were carefully chosen with Ruto giving the event attended by Raila Odinga and OKA principals a wide berth. 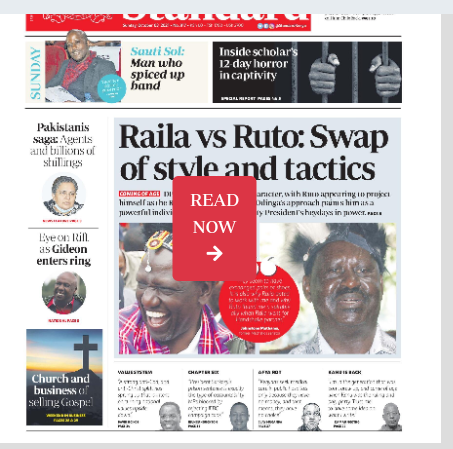 The main headline is about the politics of mount Kenya whereby the deputy president's popularity in the region is under threat.

According to the paper, Raila's activities in central which are backed by president Uhuru kenyatta should worry the deputy president who banks on support from the vote rich region to succeed his boss.

Earlier last week, Raila received a warm welcome in parts of central including Nyeri afterwhich he met MPs and Tycoons from the region who promised him Support.

Ruto on the other hand, his allies like Moses kuria and Mwangi Kiunjuri seems to be pulling in different directions over differences on parties.

Whereas Ruto wants them to fold up and Join his UDA, the two have stuck on their guns with Kiunjuri yesterday stating categorically that Mount Kenya Leaders will not fold their parties.

The former CS for agriculture said this when he opened the Service party (TSP) branch in Loitoktok Narok county. Ruto has indeed started feeling the cold of mount Kenya.

In another story, it was a big blow to ODM family and its gubernatorial aspirant Suleiman Shabal following a decision by his close ally Miraji Abdilahi to ditch the party in favour of United democratic Alliance.

Addressing the media, she said that she will not be working with Shabal because she has now moved to UDA which is associated with the deputy president William Ruto.

Shabal himself had decamped from jubilee a while ago and is keen on inheriting the current governor Ali Hasan Joho who is not legible to contest next year.

It's therefore back to the drawing board for Shabal who faces stiff competition from Mvita MP Mr Nassir for ODM ticket.

Still on ODM politics, presidential aspirant Jimmy Wanjigi has now asked party leader Raila Odinga to announce officially whether he is vying or not.

Speaking after meeting party Supporters at the coast, Wanjigi took a Swipe at Raila blaming him for being a player, a referee and VAR at the same time.

He said that he will continue to open ODM branches especially in places where they don't exist like in Rift valley counties.

He said that disciplinary action will be taken aggainst such people and that those branches won't be recognized.

In sports, the mouthwatering big match between Liverpool and Manchester city will today be played at as pep and Klop work round the clock to steady things in their respective teams.

Yesterday, Chelsea hammered Southampton at Stanford bridge 3-1 climbing to the summit of the EPL table.

Football lovers will be keen to see whose tactics between Klop and Pep will carry the day. 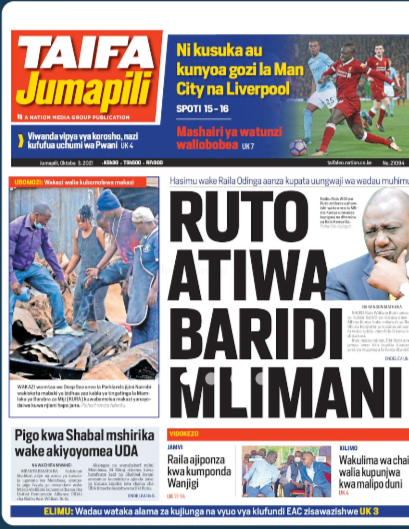 The paper reports of difficult times the clergy is having in their bid to reunite the president and his Deputy William Ruto.

The men of the cloth led by Nyeri Catholic archbishop Anthony Muheria wants the two to work together for the good of the nation.

However, deputy president William Ruto's allies are now blaming a group of leaders around the president for making it difficult for the talks to commence.

Uhuru and Ruto started drifting away from each other after the 2018 handshake between the president and ODM leader Raila Odinga.

The president has since been accusing his Deputy for lack of respect and starting early campaigns instead of helping him deliver on his mandate.

Ruto on the other hand accuses the president of betrayal having promised to back his 2022 presidential bid.

In another story, the Orange democratic movement (ODM) leader Raila Odinga has hinted at lower fuel prices next week.

Finally, the case on competency based curriculum (CBC) will be ruled in 45 days.

Education CS professor George magoha is set to appear before court to present research on CBC in a bid to defend the curriculum whose pioneer grade will be sitting for the first summative exam next year. 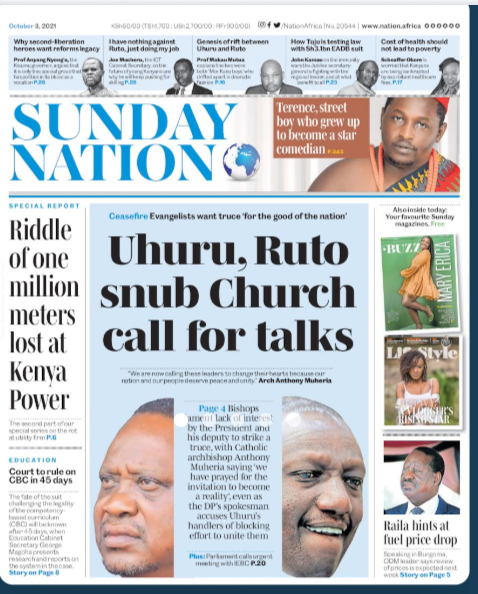