By Sackonews.com (self media writer) | 3 months ago 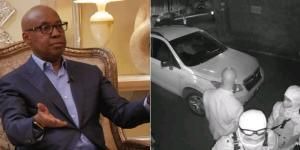 Presidential hopeful Jimi Wanjigi has narrated what transpired in a late night raid at his Kwacha Group of Companies offices in Westlands, Nairobi on Monday, January 17.

Speaking to the media, Wanjigi stated that officers believed to be DCI detectives raided his offices demanding to take him in for grilling.

He explained that the law enforcement officers forced their way into the compound dressed in protective gears similar to those used by health officials while responding to medical emergencies.

According to the businessman, the said officers did not want to wait for his lawyers but only wanted him to record a statement.

“They got in, opened the gate and surrounded the compound. They were disguised from head to toe and were carrying assault rifles. They were telling two of my lawyers who had arrived that they want me to go to CID to write a statement. We don’t know a statement for what,” he added.

However, Wanjigi linked the late night raid to some political statements he made over the weekend while popularising his presidential bid, where he accused some top political figures of dishonesty.

“I tend to believe that it has a lot to do with what I said over the weekend and maybe they have some information of the kind of campaign I intend to launch. But this weekend I was very clear about various personalities and it seems to be making some of my friends very uncomfortable,” he stated.

Wanjigi stated that the raid was a well choreographed scheme aimed at silencing him politically.

“Why are they so uncomfortable with my candidature? Why...? he posed.

Without mincing his words, the businessman also called out President Uhuru Kenyatta and Orange Democratic Movement (ODM) leader Raila Odinga for being behind his current political tribulations.

Wanjigi maintained that despite the raid and attacks, he will not be intimidated and cowed to drop his presidential bid.

“They tried this in 2017 and they failed… It is the same type of game where they are trying to intimidate me. Some people are uncomfortable with my politics or with the way I speak… I speak nothing but the truth and I don’t think there is anything wrong with speaking the truth,” he added.

On Saturday, January 15, the businessman attended Wiper Leader Kalonzo Musyoka's event at his Yatta farm, where he described Odinga as a dictator, and asked the Kamba region to support the former Vice President.

“The person who has united the Kamba community is Kalonzo and he hasn’t said that he is retiring from politics. Support him and get rid of those who want to divide you,” Wanjigi said.

Martha Karua Attacks Gov Waiguru, Reveals What Has Been Happening After Realizing DP Ruto is Losing

Why Consider a Career Coach?

8 Rules For A Happy Relationship

10 Things Not To Do Or Say If You're Saying Sorry

Why You're Still Single: You're Too Busy