Raila Odinga, the Azimio presidential candidate, and Deputy President William Ruto are neck and neck in the race for State House, with results from 96 of 291 constituencies tallied even as form errors threatened to slow the process. 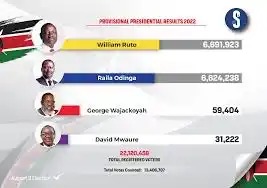 The presidential candidate of the United Democratic Alliance (UDA) was leading with 2,879,409 votes to the ODM party leader's 2,747,263 votes. According to the Independent Electoral and Boundaries Commission (IEBC) figures, the two political rivals were separated by only 132,146 votes.

Other candidates in the race to succeed President Uhuru Kenyatta, including the Roots Party's George Wajackoyah and Agano's David Mwaure Waihiga, could only garner 25,000 votes. Prof Wajackoyah finished third with 24,621 votes, while Mr Waihiga received only 13,454 votes.

A number of inconsistencies in forms 34A and 34B on the IEBC portal raised concerns about the electoral agency's figures. For example, at the Bomani Primary School polling station in Kilifi County, the uploaded form shows that Mr Odinga received 991 votes, Ruto received 81 votes, Wajackoyah received five votes, and Mwaure received none.

A candidate cannot receive 991 votes in a polling station because the IEBC has set a limit of 700 voters per polling station. Surprisingly, the presiding officer recorded a total of 285 votes cast.

Commissioner Justus Nyang'aya announced verified presidential results from various constituencies at the Bomas of Kenya auditorium, stating that the initial figures showed that the UDA presidential candidate received 51,050 votes, but it was discovered that there was an error in forms 34A, which was corrected in Form 34C, where the correct figure was captured as 41,050.

"An error in Form 34A was corrected in Form 34C," Mr Nyang'aya explained.

The winner must be declared by the electoral commission by Tuesday, August 16th.

"We have to make adjustments" to speed up the process of verifying results, said Wafula Chebukati, the head of the electoral body, in his latest briefing on Saturday.

"It takes three to four hours" to process a single constituency's results, he said. "Some of our returning officers have been sitting on chairs for three days, which is completely unacceptable."

"We believe this will expedite the process, and we should be able to dispose of the returning officers today," Mr Chebubati said.