By E.Hazard (self media writer) | 7 months ago

Today, it was yet another day full of political events in Kenya as several leaders held different meetings in different parts of the country. Deputy president William Samoei Ruto was on a mission to market his bottom-up economical strategy alongside other UDA affiliates as he toured some parts of Nakuru county. Elsewhere, governors hosted CJ Martha Koome in Kitui for the ongoing governors conference.

Meanwhile, there was a Wiper Party National Delegates Conference happening in Nairobi county, Kasarani stadium. Wiper leader Kalonzo Musyoka lead his team for this meeting that saw a number of top politicians and leaders attend.

The four OKA principals, Kalonzo Musyoka, Musalia Mudavadi, Moses Wetangula and Gedion Moi were all present under the invitation of Wiper Party leader. 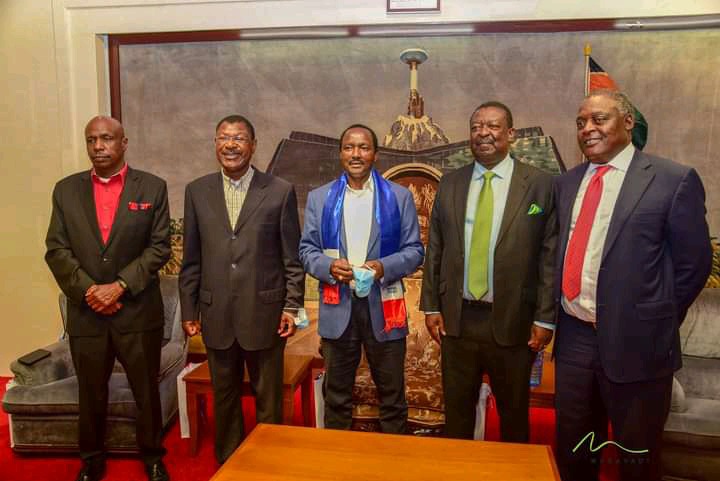 In attendance was former Prime Minister Raila Amollo Odinga who is currently a serious contender for the top leadership position of Kenya. Additionally, a number of governors were invited including Charity Ngilu from Kalonzo's background Ukambani region.

Right after the Wiper Party National Delegates Conference, each leader went to his social media updating Kenyans of the day's occurrence and how delighted they were to have been part of Kalonzo's party meeting. 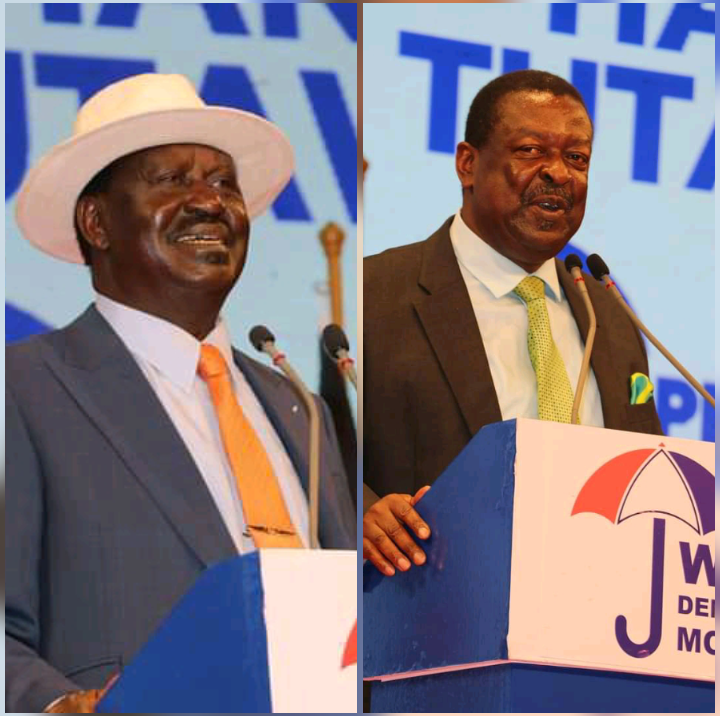 On his social media accounts Musalia Mudavadi wrote: At the invite of Wiper leader Kalonzo Musyoka, l today joined the wiper party members at their NDC at Kasarani stadium.

However, in his photos that accompanied the writings, there was no single pic of ODM Party leader Raila Odinga posted despite having attended the event. Then Kenyans massively replied to Mudavadi's post in some unfriendly way. 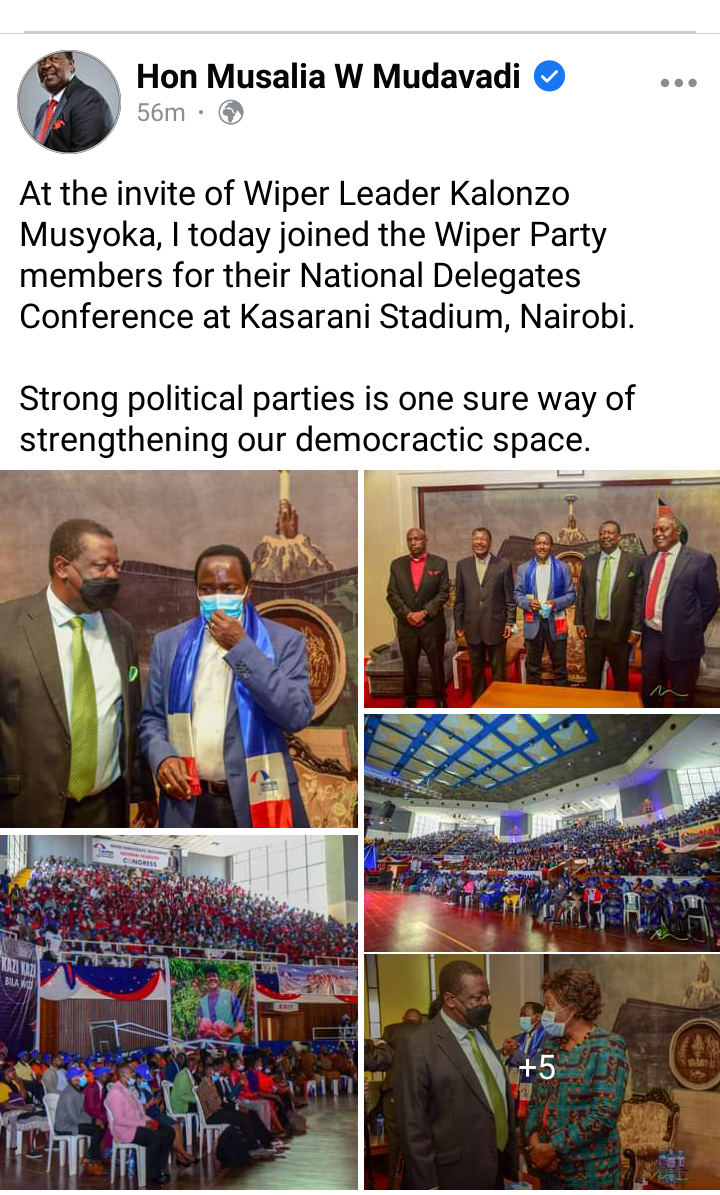 " So you assumed the 5th His Excellency Rt Hon Raila Odinga wasn't there", said Amos.

" And the guest speaker was Hon. Raila Odinga, unless you didn't attend," Nick's response.

" No single photo of Raila Odinga the 5th president in this, enyewe we wish you well in UDA," Lawrence.

Unlike Mudavadi, Gedion Moi did acknowledge the presence of the former PM who is currently the head driver of the Azimio la Umoja Movement by dropping his pictures while in the Wiper NDC Kasarani meeting. Then Kenyans applauded the KANU principal by dropping positive responses. 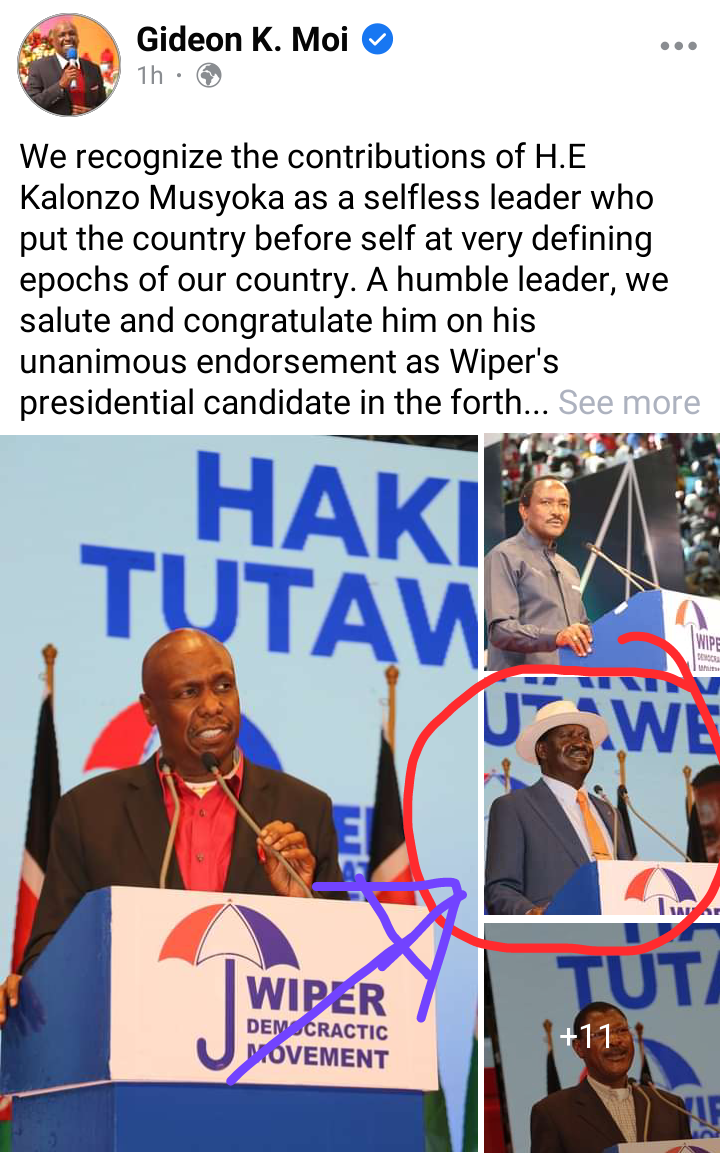 " You are our hero, thank you for recognizing H.E the 5th president of the republic of Kenya Raila Amollo Odinga on your post", De Kenyan Moja stated. 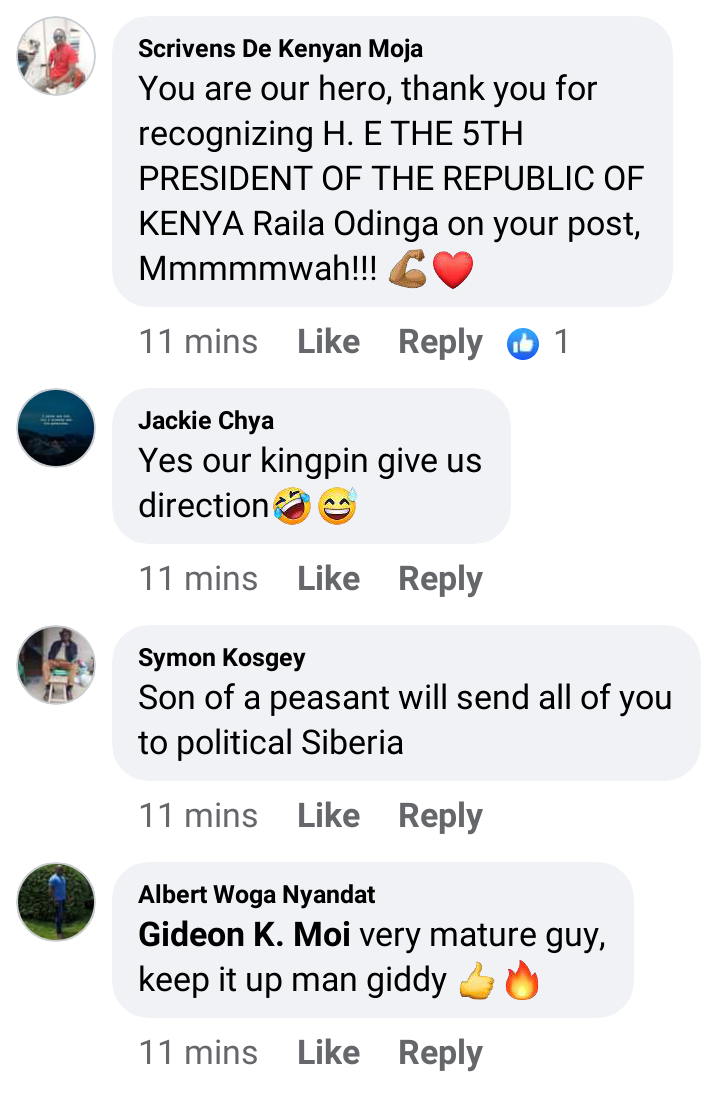 Notably, Musalia Mudavadi was before the conference alleged to have blamed Kalonzo Musyoka for having invited Me. Odinga to the Wiper Party National Delegates Conference and wanted it to be a OKA principals event.

What is your conclusion from Mudavadi's latest trends? Could he be headed his way leaving the OKA principals with Raila Odinga? Below are more reactions from Kenyans on Mudalia's post having failed to recognize Raila Odinga. (screenshots) 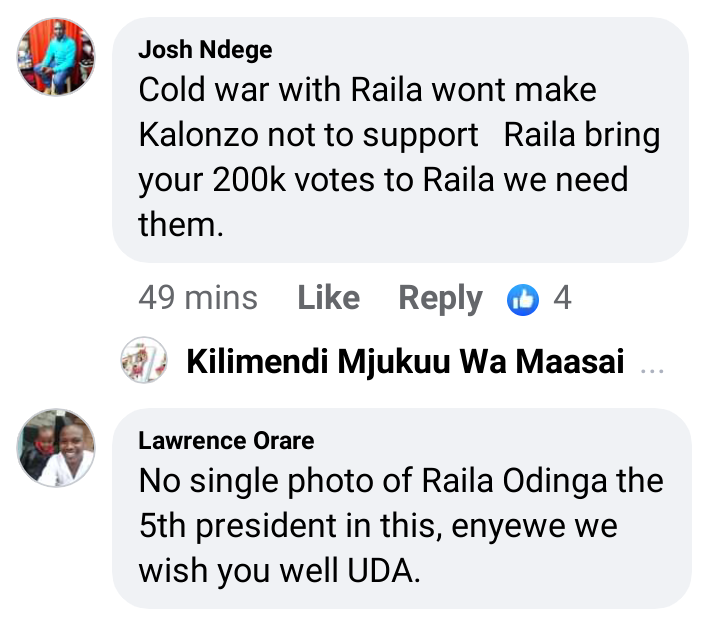 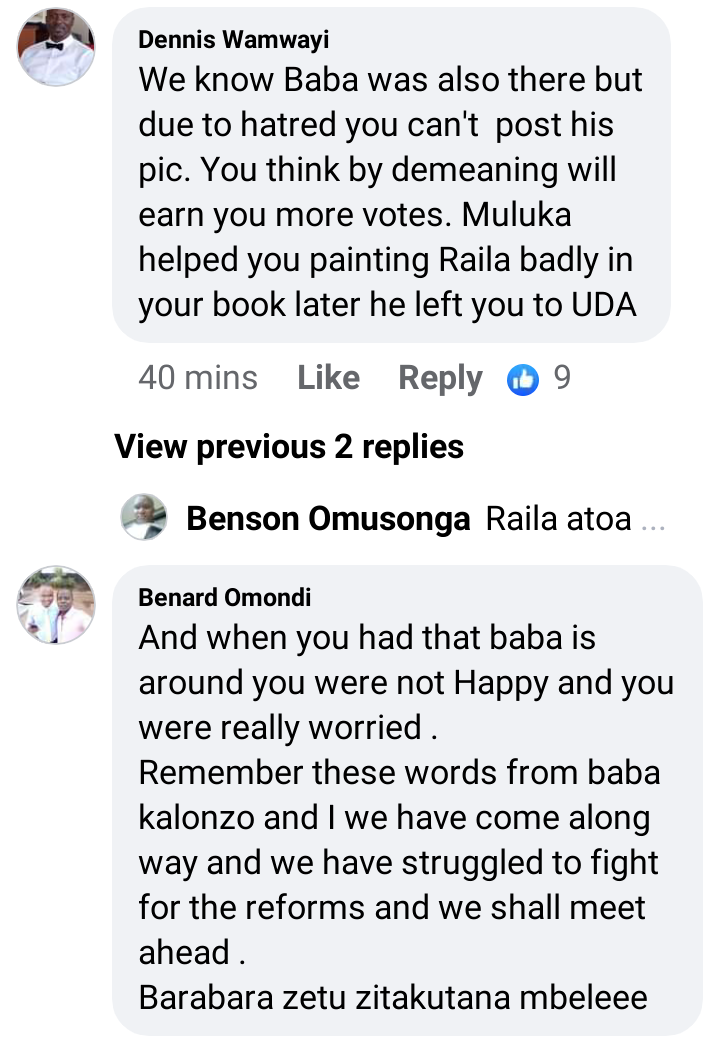 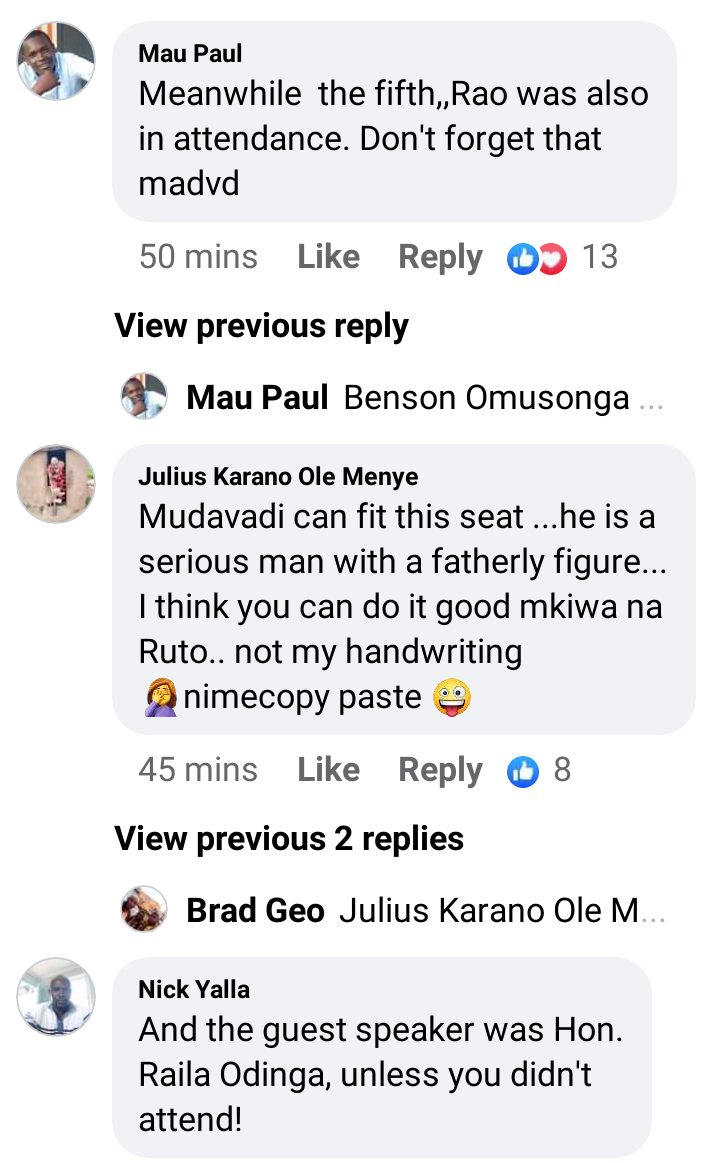 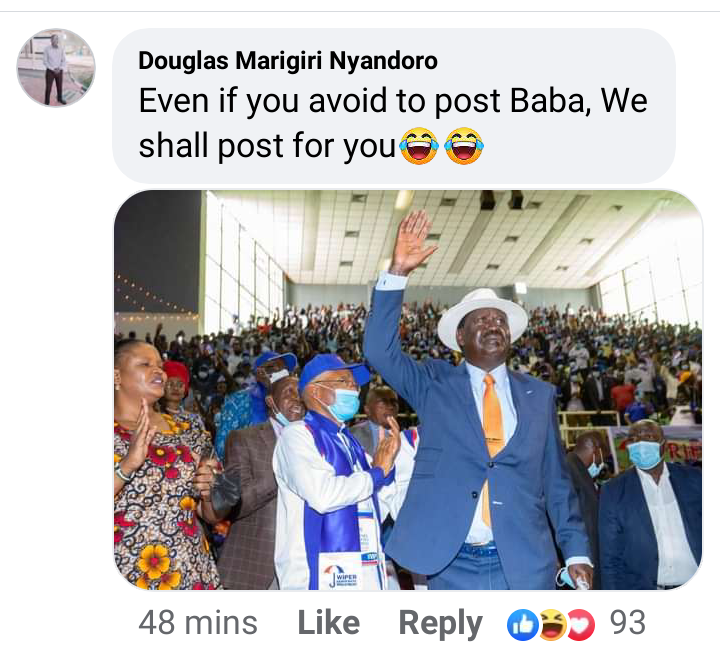 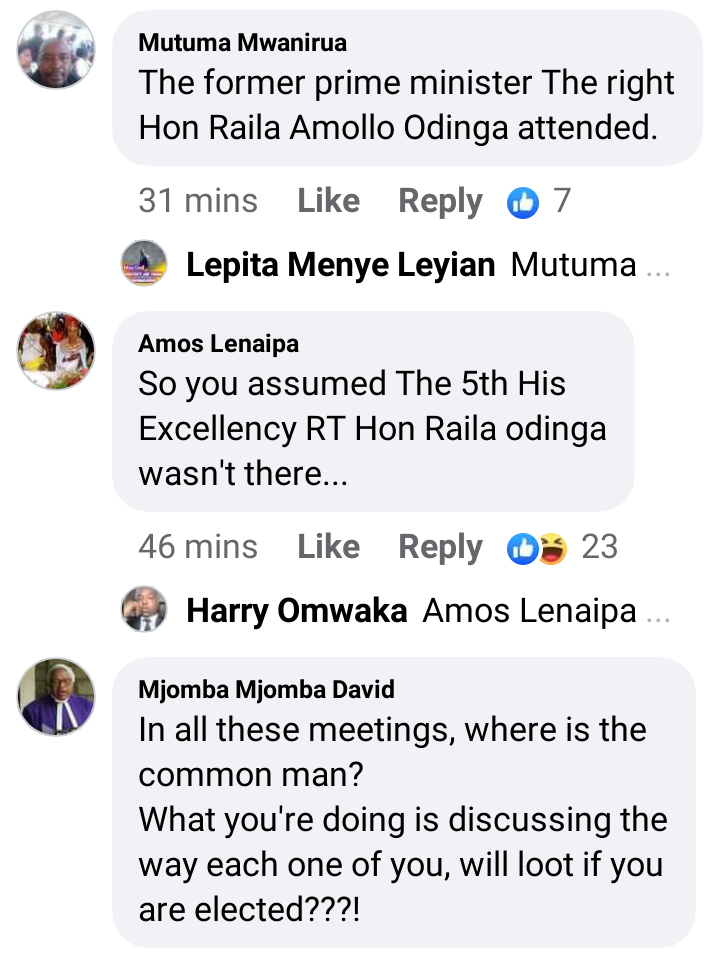 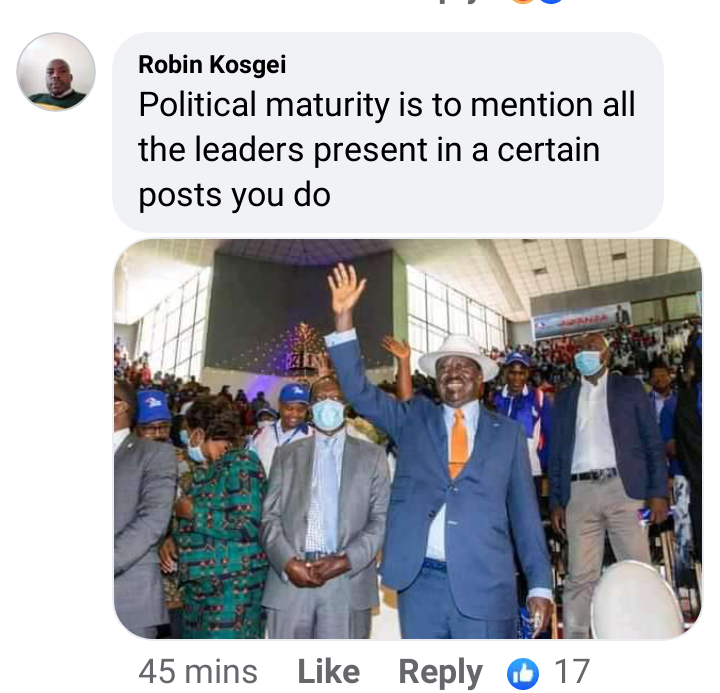