By Wilson_Nganga (self meida writer) | 22 days

President Uhuru Kenyatta is now a man looked upon by the whole word to see how he concludes his final term as Kenya's head of state. While most are speculating on who he will endorse for his succession, it is the opinion of this writer that Raila Odinga will not be among his choices for 2022. 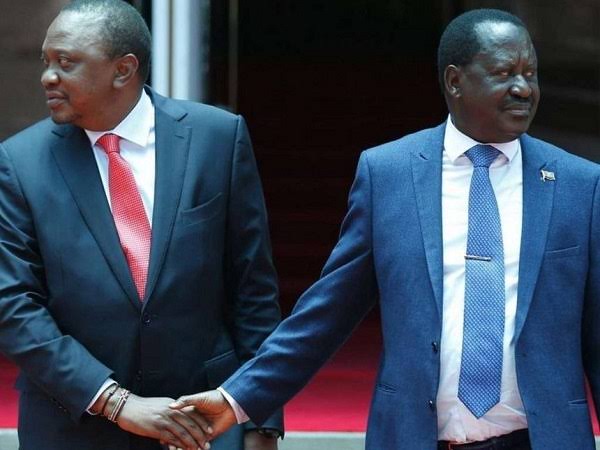 Ever since Uhuru began his presidential bid in 2002, the two did not go well with each other untill 2018, when they shared a handshake that was stamped and documented in the Building Bridges Initiative Constitutional Amendment Bill, which was later declared unconstitutional and brought to a rocky end by the Court of Appeal olin 2021. However, although the two seemed to have written right what their previous cause of antagonism were through the BBI, most of the critical issues surrounding leadership of the country were left untouched.

The backyards of the two political giants are still antagonistic. As the news and analysis are going round, it has now been proven that Raila Odinga is unsellable to the Mount Kenya region, which is the only region Uhuru can give Support for Raila to trust him.

Further, it took Uhuru many years to convince Mount Kenya and the rest of the world that he is the only qualified to lead the region as their king. This comes with the expectation of the Agikuyu community that Uhuru would solve their problems after getting into the government, including land issues, agriculture and even financial sharing structure of the government.

It will be difficult for Uhuru to trust anyone just that way and believe that he will continue the work he has been doing for the mountain region, especially Raila Odinga, who has been in the opposition of the government that has been working for the mountain. Trusting that Raila will not either end the work or destroy the mountain to eradicate its influence in the ballot will be something Uhuru Must be convinced deeply.

Lastly but not least, tye question of what Uhuru's choice for president will mean for mount Kenya will also remain another huge challenge. Although the Mountain has now bowed down to declare that they will be okey not to field candidates for Presidential position, this does not mean that they do not have grievances they want solved by the next government. Due to the weight they carry in terms of votes, they will therefore need to get an influential position in the government. The position of the Deputy President may be something Mount Kenya would love to get. However, it has been proven that one may occupy the position and have no power as it has happened to DP Ruto.

For this reason, such better positions as Cabinet Ministries such as Ministry of Interior Security and Coordination of National Government may be demanded by Uhuru's people.

Since Raila Odinga may not be willing to sacrifice all or most of the above, then he may leave Uhuru with no other option but to find another candidate.