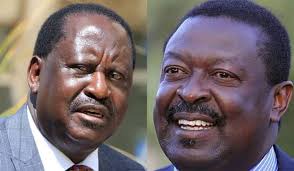 Former Amani National Congress ally and Lugari member of parliament Hon. Ayub Savula has revealed the top seat that Musalia Mudavadi was to get in Raila Odinga's government. Hon Savula who ditched ANC party for DAP few days ago, came out and revealed that after doing his own investigation, he found out that ANC and ODM party were to reach into political agreement that could have seen Musalia Mudavadi becoming the running mate of Raila Odinga.

"I have done my own investigation and found out that Mudavadi was to become Raila's running mate but went on the wrong side when it was discovered that he was sending agents to negotiate with deputy president William Ruto secretly and continued lying to ODM party on the other hand," said Hon. Savula who is the current deputy party leader for Democratic Alliance Party (DAP).

According to Savula, Amani National Congress (ANC) party leader Musalia was secretly consulting United Democratic Alliance party (UDA) leader William Ruto, leading to the agreement between the ODM party and that of Musalia to collapse immediately. ODM party is set to announce Raila's running mate in February this year. Raila who is getting support from Uhuru Kenyatta will face William Ruto in the coming presidential election this August.

Gachagua, Babu, Waiguru and Sonko May Not Be in The Ballot

Rigathi Gachagua, Sonko And Anne Waiguru Among Politicians Who Should Not Be Allowed To Vie