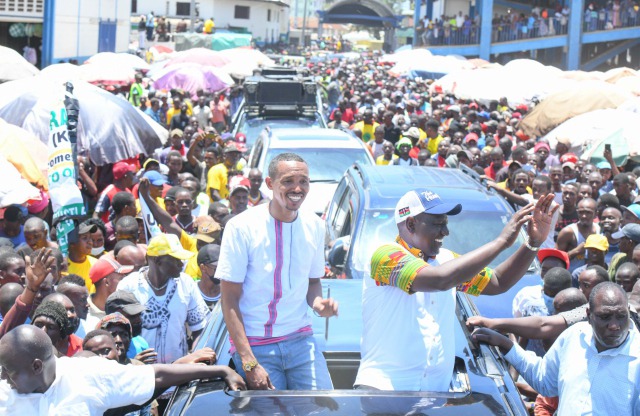 The deputy president Dr. William Samoei Ruto is considered the most prominent leader and the kingpin of the Kalenjin community. He is the spokesman of the rift valley communities ahead of the 2022 general elections.

Elections is a matter of winning or losing and even though most people from Ruto's backyard believe that he will succeed Hon. Uhuru Kenyatta as the next president that might not be the case in 2022 as everyone is subjected to losing. What next will happen when Ruto loses in 2022?

There will be a greater battle for supremacy between two known top Kalenjin leaders and it might lead to division between people from the rift valley communities. The two top leaders who have been fighting for Kalenjin supremacy is the current Deputy President William Samoei Ruto and the Senator of Baringo County Gedeon Moi, the son of the late second president of the Republic of Kenya.

Many People from Rift valley still believes that Ruto is capable to take the presidential spot from Uhuru Kenyatta and failure to do that will give Hon. Gedeon Moi more power to take over him as he will be considered as a failure and many people will not believe in him.

Gedion Moi seems to have a goal to lead the country after Agreeing to form a coalition with other top leaders and working closely with President Uhuru Kenyatta. Gedion moi is a very strong leader who will create a stiff competition incase Ruto will be out of the government and he has a higher probability of succeding in his political ambitions.

He was coronated by a section of the Kalenjin elders and this greatly added him a higher chance of becoming stronger after the 2022. The only thing that can help Ruto is winning his presidential spot and continue being the rift valley kingpin.

Do you think Gedion Moi Will Be Stronger Than Ruto Incase Ruto Loses Elections?

A Happy Man: Club President That Stood His Ground Against Mwendwa Even After Castigation From FKF.