By @yokeabu | self meida writer
Published 5 days ago - 3 views 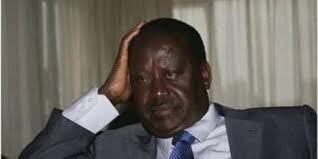 ODM leader Raila Odinga in a past function.

The ODM leader Raila Odinga is a man whose contribution in Kenyan politics and the growth of democracy cannot be over-emphasised.

His fight for multiparty democracy in the 90s has born many fruits where every Kenya is at liberty now to form and own a party.

The AU representative for infrastructure has Vied for Presidency in a record four times without success.

The last time he vied in 2017, he lost to the current president Uhuru kenyatta but contested the results in court whose verdict favoured of him but failed to participate in a repeat poll.

The historic handshake in early 2018 helped bring some relative calm in the country but caused rifts in Alliances.

Number one alliance to suffer is Uhuruto where the two currently don't see eye to eye with the president having relieved Ruto of a number of duties.

Number two Alliance to break is NASA where the Principals have Launched vicious attacks on Raila blaming him for being untrustworthy.

According to daily nation Tuesday, Raila Odinga is under siege as these three formations Launch Onslaught on him.

One, Joho and Kingi. The Gorvenors from the coast are the senior most odm members where mombasa Gorvenor is the party deputy leader.

Joho's expression of interest to vy for presidency in ODM ticket brings him into a head on collision with Raila where if the nominations arent held to the satisfaction of Joho, he may quit.

The deadline for expression of interest for those willing fly odm ticket is on Friday February 26 where Raila is expected to have registered.

Kilifi Gorvenor Amason Kingi has already expressed willingness to quit odm as he agitates for formation of a coastal party to unite the coast. Should the two leave ODM, Raila will be in big trouble as they have a lot of say at the coast.

Ruto has decided use his close allies and even family member whose empowerment programs in kisumu and siaya are being received well.

Finally, the collapse of the mighty NASA Coalition may be the last straw. With Musalia Mudavadi and Kalonzo Musyoka accusing Raila of Betrayal having promised to support one of them in 2022, Raila's response to the accusations will only help to fast track the divorce proceedings.

Calling them cowards, they cameour guns blazing terming him as a man who is only thirsty for power.

If the war of words contiue Leading to the final death of NASA, Raila will only remain with arguably only one ally and that is Uhuru kenyatta whose Support for 2022 may not be guaranteed.

However, everything is possible in politics. It's possible to see Ruto and Raila holding a joint ticket in 2022 with Raila having defended Ruto on Impeachment and hurstler narative in the recent past.

Do you think Raila can form an alliance with Ruto? Feel free to share your thoughts and comments on this on our comments platform.

Alliance Joho NASA ODM Raila Odinga
Opera News is a free to use platform and the views and opinions expressed herein are solely those of the author and do not represent, reflect or express the views of Opera News. Any/all written content and images displayed are provided by the blogger/author, appear herein as submitted by the blogger/author and are unedited by Opera News. Opera News does not consent to nor does it condone the posting of any content that violates the rights (including the copyrights) of any third party, nor content that may malign, inter alia, any religion, ethnic group, organization, gender, company, or individual. Opera News furthermore does not condone the use of our platform for the purposes encouraging/endorsing hate speech, violation of human rights and/or utterances of a defamatory nature. If the content contained herein violates any of your rights, including those of copyright, and/or violates any the above mentioned factors, you are requested to immediately notify us using via the following email address operanews-external(at)opera.com and/or report the article using the available reporting functionality built into our Platform