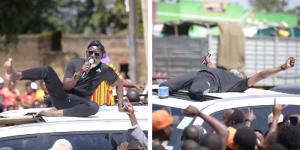 In the findings of the poll, Ruto's popularity dropped from 51.2 per cent in an earlier poll released by the IRS on June 19 to 49.9 per cent , a drop of 1.3 percentage points.

Wajackoya benefited most from this drop in popularity, with the ranking revealing that he was preferred by 2.8 per cent of the voters, an upward trajectory of 0.9 per cent.

Despite the drop in the DP's numbers, IRS ruled out the possibility of a run off explaining that in the month to election, all presidential candidates will engage in intensive campaigns, which will see at least one of them manage the 50 per cent plus one threshold.

In Nairobi, Raila remains the most popular candidate at 53.7 per cent, with Ruto coming in second at a distant 38.1 per cent. The undecided voters stood at 4.1 per cent.

According to the report, Ruto was leading in Western Region with 48.3 per cent against Odinga's 34.3 per cent. He also led in the Rift Valley and the Mount Kenya Region.

On the flip side, the former Prime Minister is the most popular candidate in Ukambani, Coast and Nyanza regions with over 50 per cent rating.

REVEALED: The rebel IEBC commissioners wanted to force the country into an election re run