By TurboNews (self media writer) | 1 year ago

The Electoral body has already announced the day of the elections and aspirants can be seen moving all around the country trying to win the hearts of Kenyans. President Kenyatta even though he has not publicly revealed the candidate he wants to take after his seat, it is crystal clear that Former Prime Minister Raila Odinga is his priority. The relationship between Raila and Uhuru has tarnished that the love that once existed between Ruto and the head of state. 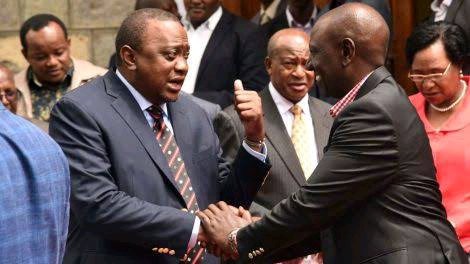 Today the deputy president revealed to the people about an agreement he had made with president Kenyatta when they first formed the government and which he intends to continue honouring even after the 2022 general elections.

Ruto said that he and president Uhuru had made an agreement to fulfill four main agenda. Ruto said that even though his boss is retiring, he will ensure that he fulfills what they had agreed on earlier on. Among the four main agenda was food security, healthy improvement and development of infrastructure.

Do you think Euro ill keep his word and continue with what Uhuru has not been able to finish? Feel free to leave a comment now.