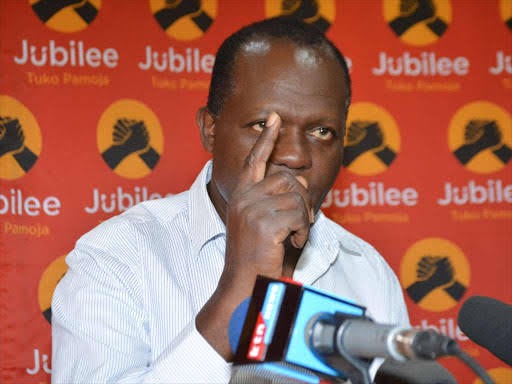 Jubilee Secretary General Raphael Tuju has cried out as his seat within the Jubilee Party gets hotter disclosing what has been happening within the party.

According to Tuju, he has explained that there are some politicians who are pushing for his ouster and that all they want is to have him out.

The Jubilee Secretary-General has alleged that all that they want is to have the party forced into a coalition in support of Raila Odinga's ODM including the control of the hundreds of millions of shillings to be made from party primaries.

"We're in that season of madness again. I'd be naive not to expect turbulence in Jubilee

"That is why they are calling for my dismissal or resignation. This position comes with a lot of responsibilities," he added.

The CS without portfolio has continued to state that those who want him removed from the party think that they will have full access to the party affairs if he is out together with David Murathe, stating that "They think having control of the party machinery will secure tickets. The noise comes with the territory. There are substantial resources. They think being at the helm gives one control over the resources."

Mr. Tuju has made it clear that he act on an interim basis and that whatever decision he makes is in the interest of Jubilee as guided by President Uhuru Kenyatta who is the Party Leader.