By InsightWriter (self media writer) | 2 months ago

Speaking at the DRC Peace Process Convention in Nairobi on 28th November 2022, President William Ruto has stated that he is happy with the wonderful job that his predecessor, Uhuru Kenyatta is doing as head of peace envoy to the war-torn Democratic Republic of Congo (DRC). The event was attended by both President William Ruto and his predecessor, Uhuru Kenyatta, and Paul Kagame (Rwanda President) among other East African leaders . President Ruto pleaded with the people of Democratic Republic of Congo to end war and bring peace, using his relationship with Uhuru Kenyatta as an example.

He told them that despite himself and Uhuru being on different political teams during the 2022 elections, it was important for them to unite and help bring peace to Kenya and the entire Eastern Africa Region. President Ruto reinstated that Kenya’s growth as a nation is dependent on the peace and success of its neighbouring countries, the East African Region, and the entire African continent.

President Ruto appointed his predecessor Uhuru Kenyatta as peace envoy for the Great Lakes Region and the Horn of Africa shortly after he was sworn in as the fifth president. He stated that he was confident that Uhuru’s effort would help bring peace to the region as he had already started the process during his tenure as the President of Kenya and head of the East Africa Community. 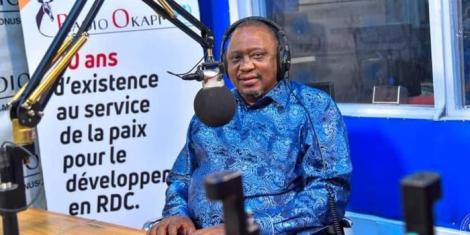 Photo (courtesy): Uhuru Kenyatta during a radio interview with a DRC Radio Station.

Uhuru Kenyatta has requested all Eastern African leaders and groups to focus on ending hostility and restore peace and unity in DRC with a mission to enhance the bond of the East Africa region. He reminded the DRC leaders and citizens that they are the only ones who can bring peace to their nation.

Watch the speech here as shared by NTV Kenya https://fb.watch/h4hye4X4nT/

Content created and supplied by: InsightWriter (via Opera News )