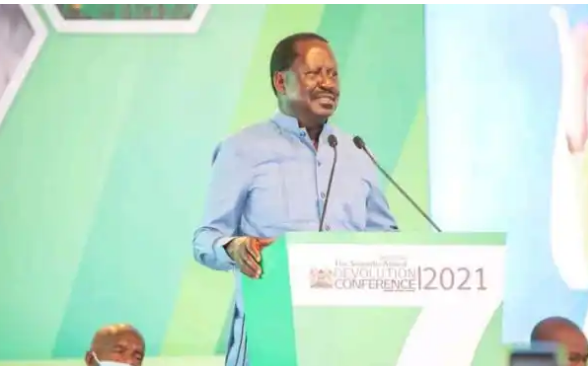 Odinga said the second in command missed the meeting after he had sent his apologies following his busy schedule.

The DP is today popularizing his bottom-up economic model in Nandi and Uasin Gishu counties as he seeks to endear himself to the electorate ahead of the 2022 General Election.

He will then attend the opening of the Emgwen TTI in Nandi before making two more stops in Uasin Gishu, at Chebolol and Kesses.

In his speech, Raila Odinga said that it is not time to start showing people political differences but focus more on devolution goverment to bring more resources to the common citizens. Quoting about his efforts to unite the country ahead of 202 general elections.

Raila urged the government to establish a National Climate Change Committee under the presidency. He noted that the effects of climate change are evident and the need to mitigate it is inevitable.

He urged the government to tackle overlapping and duplication of functions by state agencies, corporations, and regional development authorities and also prioritize counties by making them the largest spenders in the development revenue.

“The Public Finance Management (PFM) Act 2012 requires that at least 30 percent of the spending should be on development over a medium-term.

Yet today, majority counties spend more than 50 per cent of their revenue on personal emoluments,” noted Raila.

“This is where devolution is failing to change lives as it should. So we need to enforce and ensure adherence to the Public Finance Management Act.”