By Felix.magare (self media writer) | 4 months ago 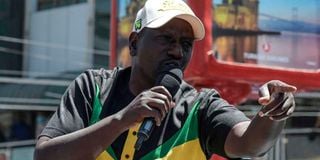 UDA officials Veronica Maina (secretary-general) and Johnson Muthama (chairman) on Monday wrote to President Kenyatta, the chairperson of the National Security Council, blaming their opponents for the violence, which they also claimed was condoned by the State.

“We write to express our profound concern about recent deeply worrying security incidents, sustained by official inaction and condonement by the State, and their implications in the light of the impending General election, and national stability in general,” UDA states in the letter.

The party protested that over 10 meetings were disrupted, and at least six cases were reported to Police Inspector-General Hillary Mutyambai.

“They have all gone unattended by his office,” the letter says, adding that “the inaction explicitly signals the State’s approval or support for the criminal acts of ethnic and political violence conducted in furtherance of a divisive agenda obviously focused on the 2022 General Election.”

“Without your impartial and proactive enforcement of the legal framework to uphold constitutional freedoms, human rights, democratic participation and national cohesion, your government will in effect be enabling the ODM and Azimio to set the stage for an extremely troubled General Election season in 2022,” UDA says in the letter.

Content created and supplied by: Felix.magare (via Opera News )