By Rasgurl (self meida writer) | 1 months 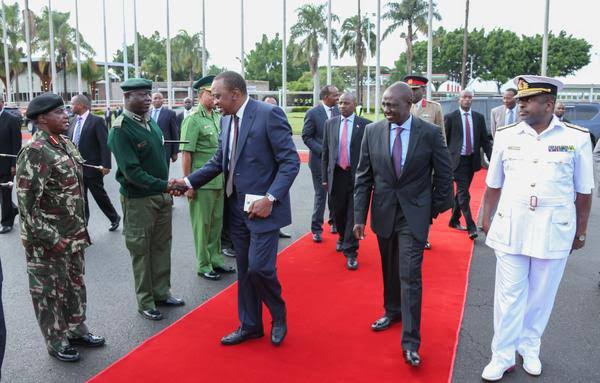 President Uhuru Kenyatta joined many other African heads of state at President Yoweri Museveni's inauguration in Kampala, Uganda, on Wednesday.

During his presidency, Museveni said that Uganda had gone from a country with deficits to one with surpluses in agricultural production and manufacturing.

“In 1986, Uganda was a land of scarcity, with no sugar, soap, paraffin, textiles, salt, sodas, alcohol, or petrol, among other things. Uganda is now a country of surpluses,” he said, citing the small awakening of parts of the population.

The Ugandan president thanked Uhuru and other regional leaders for allowing Ugandan exports such as sugar and maize surpluses to enter their markets.

Simultaneously, Museveni chastised unidentified international powers for continuing to lecture African countries on good governance, claiming that some of them may not have the continent's best interests at heart.

“It's very amusing to hear certain people lecturing us about democracy. What qualifications do you have to give us a lesson on democracy? We will show you what we are doing in a polite manner if you want to know, but no lectures,” Museveni advised.

Museveni was re-elected President of Uganda on January 17, 2021, despite his main rival Bobi Wine accusing him of vote fraud.

Content created and supplied by: Rasgurl (via Opera News )

End of Road For Alshabaab as Police in Kwale Foils Their Attack, Find List of Targeted Areas

Side Effects Of Wearing Makeup Regularly

How To Count Safe Days To Prevent Unwanted Pregnancy

Healthy Reasons Why you Should Eat Managu

What Are Medical Termination Of Early Pregnancy In Women

Consume These Amazing Food To Boost Your Immune System

'Detox' The New Matatu Ngong Residents Are Talking About

Reason You Should Use Aloe Vera Everyday