From Grass to Grace Then to Grass Again, the Devastating Life of Githeri Man 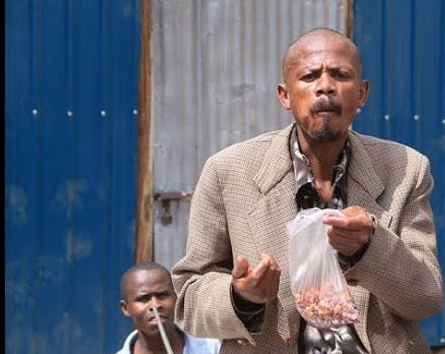 What was meant to be a normal morning for Martin Kamotho, turned out to be a new dor for his life as fortunes began knocking on his door. He woke up at midnight so he could be among the first voters at Imara Primary School in Dandora, Nairobi, to cast his vote as Kenyans decided who would rule the country in the 2017 general elections.

When he arrived at the polling station on August 8, he discovered that he had been outfoxed by the majority of his neighbours, who had turned up even earlier. This marked the beginning of a long and tedious day.

Mr Kamotho had no money, but hunger didn't care. The longer he waited in line, the hungrier he grew. But he was also determined to vote. Soon, he spotted a familiar food vendor preying on those waiting in the winding queue and did the most logical thing; he pleaded with her to give him some boiled maize and beans, popularly known as githeri. She obliged.

Little did Kamotho know that his bag of githeri would make him famous more than the election process. His photo went viral but he was not aware since he did not a phone at that time to follow up on trending topics.

As opportunities knocked on his door, he was first awarded by telecom giant Safaricom. Martin Kamotho aka githeri man was given two Samsung S8+ smart phones for him and his wife and a Tecno Camon for his daughter.

He was also awarded two Sh5,000 credit cards to enable him to follow up with the happenings on social media.

The 41-year-old Kamotho revealed that he did not own a smartphone adding that he learnt about his photos on Facebook through his aunt.

Kamotho who lives with his family in Kayole estate, Nairobi stated that he works as a cleaner in the Nairobi County government. 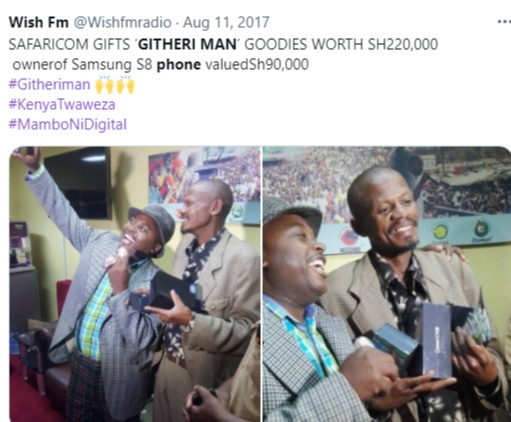 In the same election year, Githeri man was among people lined up to receive the Head of State Commendation, Civilian Division, during Kenya's 54th Jamuhuri Day celebrations.

The medals are normally given to individuals in recognition of outstanding or distinguished services rendered to the nation in various capacities and responsibilities. 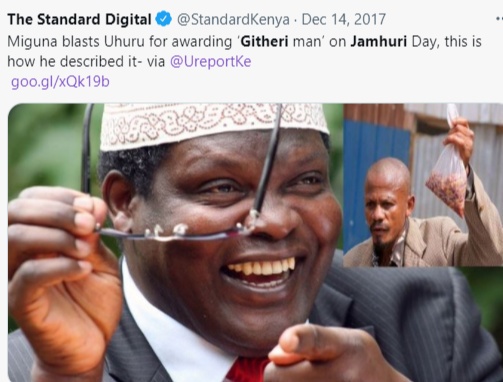 Later on, he became a proud landowner in Karen after Ngong Crescent gifted him with a serviced plot worth Ksh269,000.

The parcel of land came after he was accorded social media recognition during the voting process where he was credited with calming tensions through modified versions of his picture that did rounds on the internet.

The trend went viral and caught the attention of several corporates as well as the Kenyan media fraternity who later looked for him and found him in Kayole where he lives. 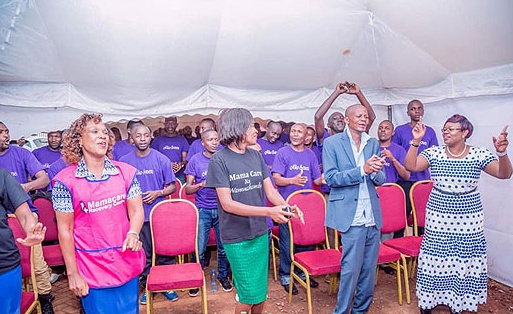 His lawyer Danson Ng’ang’a revealed how Githeri Man’s family approached him to protect them from potential fraudsters and invalid contracts.

“When the family contacted me, they said they are getting so many calls from corporates and individuals but we want to legalise all the engagements we have and we want to walk on the legal path, so any promises, any contracts can be valid,” said Mr Ng’ang’a.

His manager, Christopher Kirwa, explained that his role is to link the family with potential sponsors and partners.

“My role here is to advice the family and bridge the gap between the people who want to help them, in terms of corporates, and them… and to guide them in that process so that it’s easy. As a corporate they expect a certain way of dealing which is what we did. So, I’m acting as his agent, that’s my role,” explained Mr Kirwa.

He added: “The first guy we were able to do an activation with was Big Square because they run a chain of restaurants. We then had User Name (Real Estate dealers), Bonfire Adventures and Happy Feet (shoe sellers).” 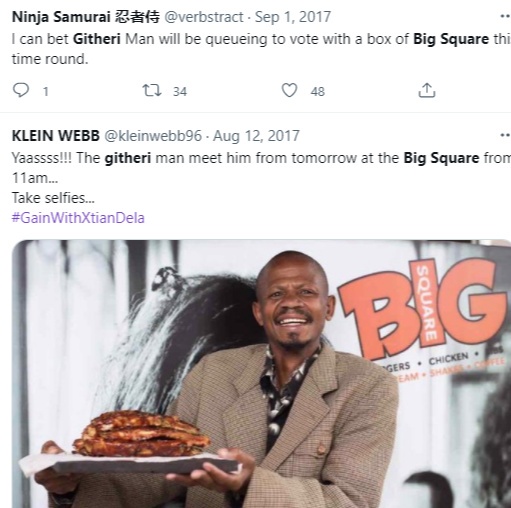 In 2018, Kamotho checked into rehab for alcohol addiction.

This is according to Kiambu Woman Representative Gathoni Wamuchomba who claimed to have received instructions from State House to trace his whereabouts and admit him to rehab.

Wamuchomba claimed ‘Githeri man’ had contacted the president’s handlers at Jacaranda Grounds, in Donholm, and expressed his desire to turn a new leaf.

“Today, I embarked on a mission to trace him from his rural home in Kiambururu in Githunguri, traced his relatives who helped located him in Kayole,” Ms Wamuchomba wrote on Facebook.

She shared pictures of a frail-looking ‘Githeri man’ when she went to pick him up and admitted him at Mama Care Addiction and Recovery Center.

Kamotho was among 77 graduands who successfully completed a seven-month rehabilitation program at the Mama Care Rehabilitation Centre, Kiambu in 2019.

President Uhuru Kenyatta was among the dignitaries who graced the event initiated by Kiambu Woman Representative Gathoni Wa Muchomba. 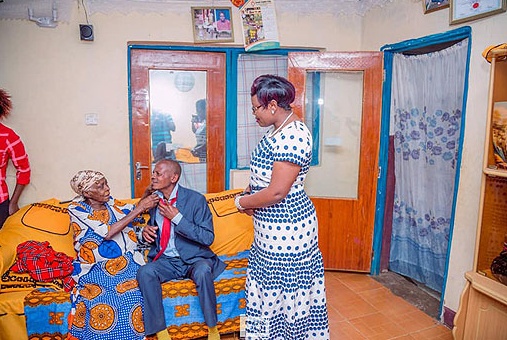 After completing his rehab period, some not-so-encouraging photos of Kamotho went viral on social media and he looked totally drunk.

He was being pushed on a trolley and had no idea of where he was.

The photos elicited mixed reactions and although some bashed him, others were kind enough to suggest alternative ways of helping him.

However, Githeri man, who spoke during a TV interview, dismissed the allegations claiming that he was only putting his acting skills to practice when the photo was taken.

“I did not do anything wrong. If anything, it was me who asked to be put on a trolley. I am a comedian, and I wanted to entertain my people by pretending that I am a wealthy man being ‘chauffeured around’,” ascertained Githeriman.

In addition, the 43-year-old admitted to engaging in excessive alcoholism after some of the business owners and corporates, who had pledged to help him financially, ditched him.

“I have been knocking on the doors of people who promised to help me. However, they often tell me that they are not in a position to assist. What do you expect me to do when that is the case?” he questioned.