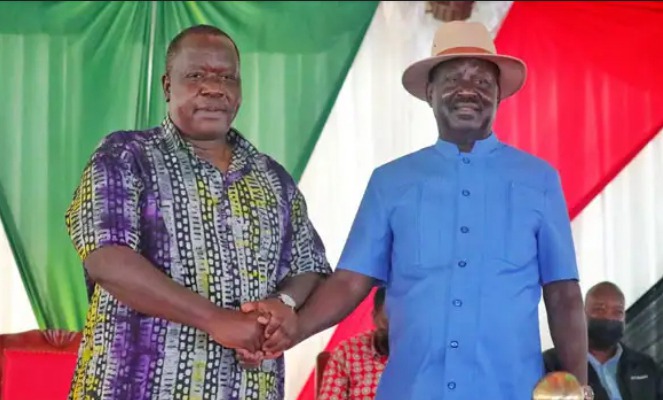 Raila Odinga, a presidential candidate for the Azimio La Umoja One Kenya Coalition Party, has defended Interior Cabinet Secretary Dr. Fred Matiang'i against the persistent criticism from the coalition's allies in Kenya Kwanza.

On Friday, while on a campaign stop in Nyamira, Odinga praised Matiang'i as a great leader and vowed to protect him from any political assaults.

The CS was criticized for his audacity in representing the country, the former premier informed the locals. If he wins the upcoming elections, Odinga promised the Kisii community, where Matiang'i is from, that he would incorporate Matiang'i into his administration.

"Fred Matiang'i has done a good job, and we've come a long way. We've worked with him for a while, but these other people you know are now opposing him. He is actually being attacked, but Baba is protecting him "said Odinga.

"I'll look out for him. I can see you (the voters) supporting Matiang'i firmly from where I am. and I'll be standing next to him up there. After August 9th, we will continue working with him."

The former premier claimed in a similar manner that his rivals were conspiring against Mataing'i because he opposed their alleged vices.

"The criminals are fighting him because he is a man who knows how to do his job; wale wakora wanampiga kwa sababu ya ile kazi nzuri ambayo anaifanya," said Odinga.

Odinga urged the electorate to make their decision by electing the leaders who are most well-liked within Azimio in light of the ongoing conflict over party politics in the Kisii and Migori counties that is related to Azimio.

He emphasized that the affiliate parties had the right to put forth any candidate because Azimio would win with the support of any candidate.

I have seen a lot of candidates from Wiper, UPA, and ODM KANU in the area, and all of them are under Azimio, the man said. Wanang'ang'ania matiti lakini baba ni mmoja, hao wote ni watoto wa mama mmoja

Aspirants for governor Simba Arati (ODM), Chris Obure (Jubilee), and Senator Sam Ongeri (Democratic Action Party-Kenya), who are all members of the Azimio coalition and are running to succeed outgoing Governor James Ongwae, have been in a dispute.

Why Kenya Kwanza Will Have Full Control In Parliament And Senate Despite Having Few MP Seats.

Chebukati Orders Arrest Of People Who Attacked Him At Bomas

Why Chebukati Has Suspended Elections In Mombasa And Kakamega Counties