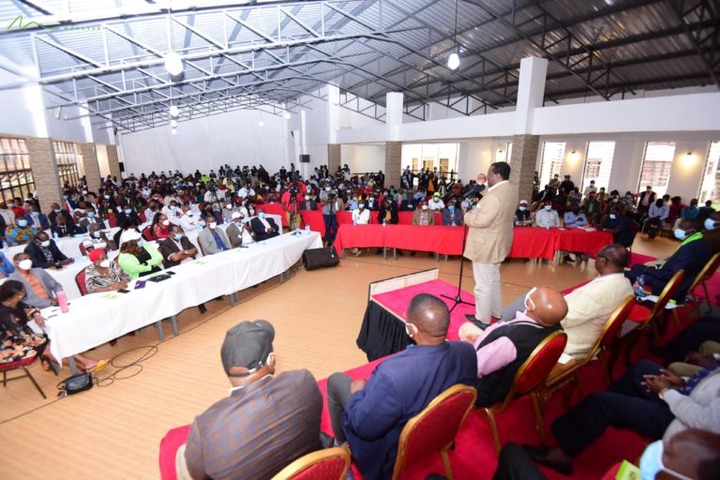 Speaking on Sunday on his second day of Meru's visit to the Chabuene Methodist Church in North Imenti constituency, Mudavadi said drums of political violence had started beating and called on the church to preach the peace.

Kenya will face the elections in August 2022 and the policy of succession has taken center stage in the country as key leaders position themselves to succeed President Uhuru Kenyatta whose second and final term ends next year.

Mudavadi called on Church leaders around the country to help educate people on the importance of electing leaders of integrity.

“The Church should help us educate our people about the importance of electing leaders of moral quality to lead. Without civic education, we will not be able to elect the right leaders, ”he said, adding that it is only through good governance that the country will achieve economic prosperity.

At the same time, Mudavadi urged young people across the country to register for voters and be able to participate in the political process of electing their leaders.

Mudavadi has been in Meru County for two days wooing the region to support his 2022 presidential candidacy. He was greeted by Governor Kiraitu Murungi who assured him of his support.

At the same time, Mudavadi said his party would sponsor a motion in parliament to breathe new life into certain clauses contained in the rejected BBI bill.

Noting that not all parts of the bill were bad for the country, Mudavadi said some clauses like the introduction of the office of the official opposition were good for this country.

He said that much of the issues raised in the bill that was rejected by the courts could be passed through a private member's initiative and that he will invite his MPs to bring forward motions on it.

“On the BBI bill, there are certain issues that can be dealt with without going through the referendum. We can do something about such clauses which are good for this country. As a country, we need to have an opposition that can take into account the government of the day. Multipatysim is good for democratic government, ”he said.

Speaking in Meru County over the weekend, party leader Amani said he would also rally his troops in parliament to table a motion to revise the 2021 finance law that resulted in an increase in the budget. fuel tax.

He said the increase in the price at the pump will make life more difficult for a majority of Kenyans.

He said the government cannot depend on the high cost of fuel as a means of raising funds to meet its international and local debt.

“Why is the government hurting Kenyans by raising fuel prices? This is because thanks to petroleum products, he finds quick income to settle his debts. This is unacceptable, ”Mudavadi said.

Mudavadi over the weekend was in Meru County on a tour to meet the locals.

Greeted by his host, Governor Kiraitu Murungi and a number of MCAs, Mudavadi held a series of meetings with elders and thought leaders from the county where he echoed the message of peace as the country moved towards the general election next year.

Leader Amani has stepped up his campaigns in the Mount Kenya region where he has indicated he will likely choose his running mate for the 2022 presidential elections.

In a meeting with Governor Kiraitu, Mudavadi said the Meru region occupies an important place in the country's political landscape.

Mudavadi said no region should be left behind in development, as the country's economic growth depends on the development of all regions.

“Every part of this country should be developed and allocated resources equitably. No region should be left behind. We should be able to give counties a minimum of 35% of national income from the current 15% allocation, ”he said.

“I am here at the invitation of Governor Kiraitu. The Merus have been my great friends and I am here to ask for your support and to walk together, ”he said.

Mudavadi said the country has sufficient human resources to help it achieve its Vision 2030 economic development.

“If there are human resources that we need as a country, I know where to get them; Grouper. We have what it takes to stabilize and make this country great. As we head towards the elections all I can ask is to work and walk together to make the country a better place, ”he told residents at a town hall.

The Amani chief said his administration would strive to make the country a better place where the rule of law is upheld and corrupt people brought to justice.

“I want a country where every citizen can benefit from good health care. We need to do two things to fight debt; seal the channels of corruption and the budget according to our capabilities, ”he said, adding:“ There is no dignity in poverty. We must do everything to improve the lives of our people. "

“If we are talking about policies to grow the economy, then we cannot trust a person who was in the kitchen to make the soup, which has gone awry. How then can we trust such a person to start making another soup? He said in reference to Vice President William Ruto.

Kiraitu said the region is open to a Mudavadi administration if the interests of the region are taken into account.

“The people of Meru love the way you play politics. You are not a person of hate and abuse and our main interest is to know the kind of people we support and what they will offer our region, ”he said.

“Musalia is a story in our country Meru. He pulled the economy out of the troubled waters when he was Minister of Finance in 1993. He is in great shape and has what it takes to guide this country, ”he added.

“I invited Mudavadi here because we want to change the politics of this region. There are people who have visited Mudavadi in Nairobi and come back with a statement that the Meru people have decided. But as governor, I declare that the Meru people will decide. I want him to sell his policies to the people of Meru and together we make Meru great, ”Kiraitu said at a town hall attended by, among others, a number of MCAs, the former principal secretary of the government. Ministry of the Interior Mutea Iringo, elders of the Njuri Ncheke. and residents.

Kiraitu said that the Meru people will define their own interests and not outsiders to decide for the community.

“We cannot protect our interests without a vehicle. You can't have a serious business without a store. We are going to have our own party, to help us negotiate for our interests, ”he said, adding,“ The party is what we will use to talk. "

Kiraitu called on the Musalia government to tackle the problems of roads, water and agriculture, as it challenged it to initiate a parliamentary process to reduce fuel prices.

On security, Mudavadi said every Kenyan should be able to live and work in any part of the country.

“We shouldn't approach every election with anxiety and apprehension about our security. Let's aim for a smooth transfer as we did in 2002. Our actions as politicians should seek to protect all Kenyans and not to foster chaos. I promise to protect all citizens and I will treat without mercy those who once again aim to wreak havoc in this country, ”he said.

He added: “Whether you come from the mountain, the valley, the lake, the coast or even a desert, you are first of all a Kenyan, so it is not fair that we are always divided according to the place where you come from, "he said.

Current leaders have argued that the region is not a store that anyone can enter as they please, and that Governor Kiraitu is the "gateway" to Meru's politics.

“Governor Kiraitu is our point of contact and Mudavadi has walked through the gateway to our region. We will listen to his policies and where Kiraitu leads us we will go, ”Iringo said.

“We need leaders who care more about our country. A leader who will revive our agricultural sector and ensure that our miraa, our sugar cane, our corn and all farmers benefit from their sweat, ”he said.

The country, he said, is heavily in debt which requires practical solutions to address it.