By CasWrites (self meida writer) | 23 days President Uhuru Kenyatta is expected to make changes to his Executive arm of government,by replacing some of the Cabinet Secretaries and bringing in new ones.

This was reported by the local dailies today,with those Cabinet Secretaries from DP Ruto's side reported to be in fear the broom might sweep them, because of DP Ruto and Uhuru's persistent disagreements.

And now a Cabinet Secretary has claimed that President Uhuru's handlers have been camping at various ministries,as they ask who has been feeding DP Ruto with information about government's projects across the country.

He also added the state has been caught unaware with how DP Ruto has well informed reports on almost all government's projects by name, by worth,by contactors and by time set to complete such projects,even though the DP has been locked out of government. 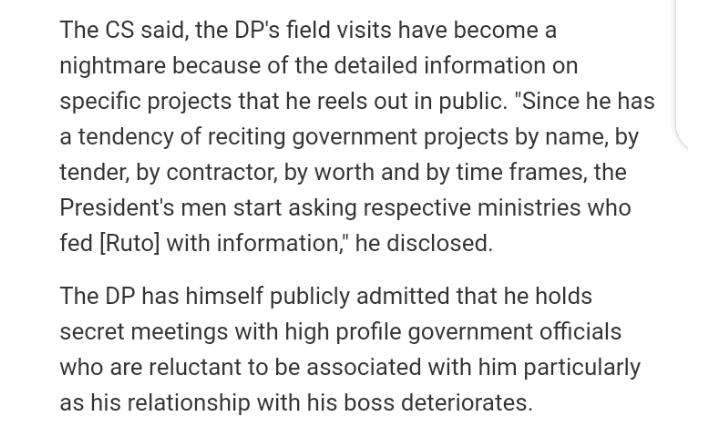 The DP has however,made it clear that he has been meeting with top government officials,who are fearing if they come public and support his Hustler Nation's agenda,they will be harassed by State agencies such as DCI.

Ruto also revealed the state was out to humiliate him and anyone associated with him was being followed by DCI or intimidated.

Reports further claimed the decision by President Uhuru Kenyatta to overhaul the Cabinet,might have been necessitated by government's projects being leaked to DP Ruto and the need,to weed DP Ruto's allies out of the Jubilee government.

It has not been indicated the day or time President Uhuru will announce new changes to the Cabinet and who will be replaced with who.

It is understood the President wants to bring new blood to the Executive and had asked One Kenya Alliance leaders; Musalia Mudavadi, Kalonzo Musyoka, Gideon Moi, Moses Wetangula and Raila Odinga, to propose some names that will be included in the cabinet changes to be done soon.