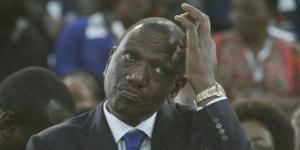 The National Police Service has issued a statement after the United Democratic Alliance (UDA) wrote a letter to President Uhuru Kenyatta over the chaos that has rocked some of their rallies.

In the letter addressed to the President, who chairs the National Security Council, the allies of the Deputy President William Ruto accused the state of complicity in investigating the cases of violence that had been witnessed in a number of their rallies.

However, in a statement dated Wednesday, January 19, and signed by the police spokesperson, Bruno Shioso, the police stated that the allegations were baseless and meant to hurt the reputation of the police force.

“Reference is made to a letter by the United Democratic Alliance alleging the complicity of the National Police Service in instances of violence involving the party.

“The allegations are utterly baseless and false in nature and are maliciously intended to injure the reputation of the NPS and its officers,” read the statement in part.

NPS added that UDA had not formally reported the matter to the police insisting that they were a professional body who follow the law in the course of carrying out their duties.

They added that the leaders allied to the DP have consistently attacked their officers based on falsehood accusations.

“The allegations form a sustained and regrettable streak of unfounded, outrageous, and provocative allegations by the leadership of the party.

“The National Police Service is a professional institution that is committed to the rule of law and upholding of laid out protocols that guide the conduct of political rallies and other public events. These guidelines will continue to be upheld fairly, firmly,” read the statement in part.

In the hard-hitting letter to Uhuru, UDA claimed that no action had been taken against the culprits as the police were inclined towards other political formations.

"As a general rule, nothing has been done by the security agencies to prevent or arrest this egregious criminality. Without any form of accountability, the emboldened perpetrators continue to gloat over their deeds and threaten to unleash worse mayhem in future," the letter read in part.

In response, Raila Secretariat stated alleged that the DP had sponsored the violence at Jacaranda for political mileage.