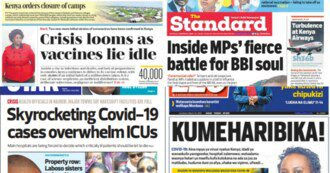 Most of the dailies today headlines are touching on the increased COVID-19 cases in the country with rising number of fatalities. 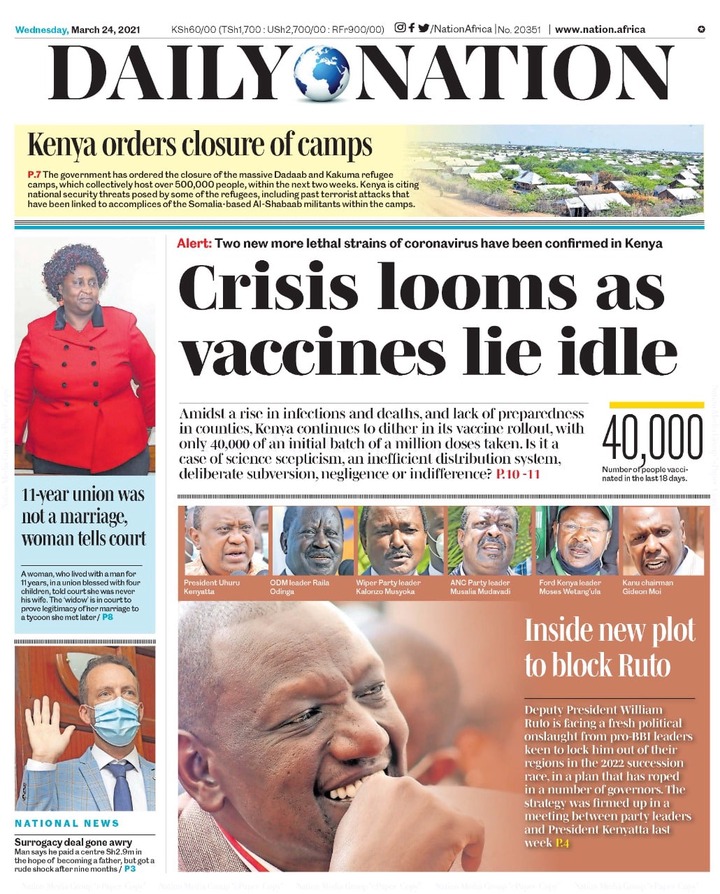 Inside New Plot to Block Ruto: Deputy President William Ruto is currently facing an attempt to thrown him out of the government due to what has been seen as a plot to sabotage his 2022 presidential bid.

Inmeeting between the political bigwigs, the Pro-BBI leaders are said to be engaging in more plots to see DP Ruto out of the presidential race come 2022.

Leaders such as Raila Odinga (ODM), Kalonzo Musyoka (Wiper), Musalia Mudavadi (ANC), Moses Wetang'ula (Ford Kenya), Charity Ngilu (Narc) and Gideon Moi (KANU) who had a meeting with the President at State House have all vowed to scatter Ruto's influence across the country in order to minimize his aggressive pursuasive of some regions that hold higher votes that could see him ascend into the presidency.

In the Standard, Kenya chaotic vaccine rollout has left Kenyans Covid-19 response clutching at straws with badic activities such as rollout of national vaccination falling to take off has it had earlier been planned by the Ministry of Health leaving Kenyans to scorch in the rising Covid-19 cases. 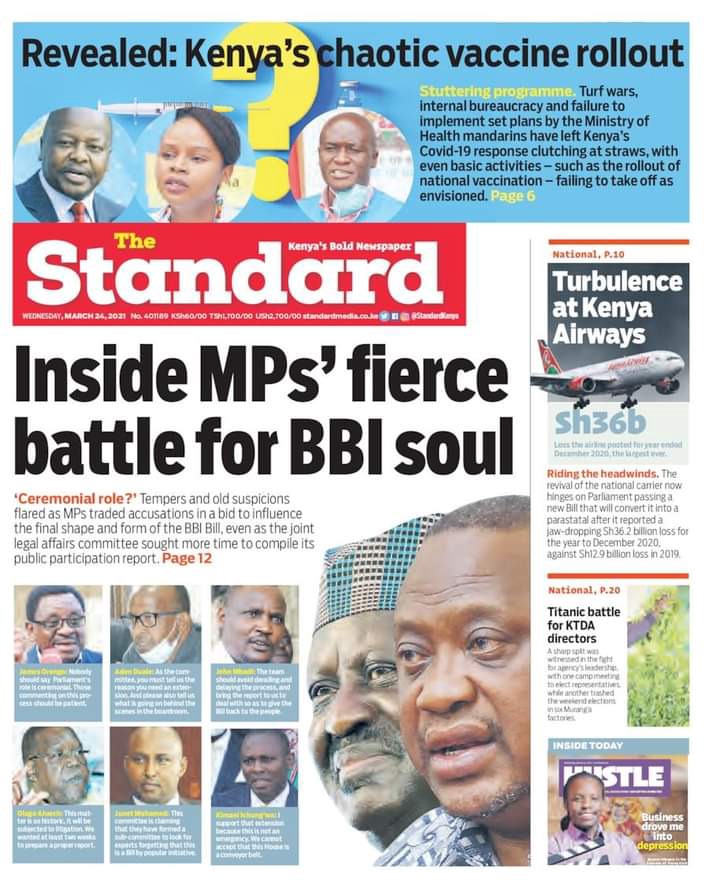 Inside MP's fierce battle for BBI soul as the National Assembly seems to be divided in the bill. Some are calling for amendment on some of the bills clauses before it's released for voting by the Senate. However, especially the anti-BBI legislators who had earlier called on amendment of some clause but because they seemed to be supporters of DP Ruto are questioning why they want it to be amended now when they categorically refused at the early stages.

Kumeharibika! Taifa Leo still touches on Covid-19 especially on new emerges that the ICU beds in major hospitals are already full.According to the daily, with the new third wave variant, many Kenyans are at the risk of succumbing to the virus. 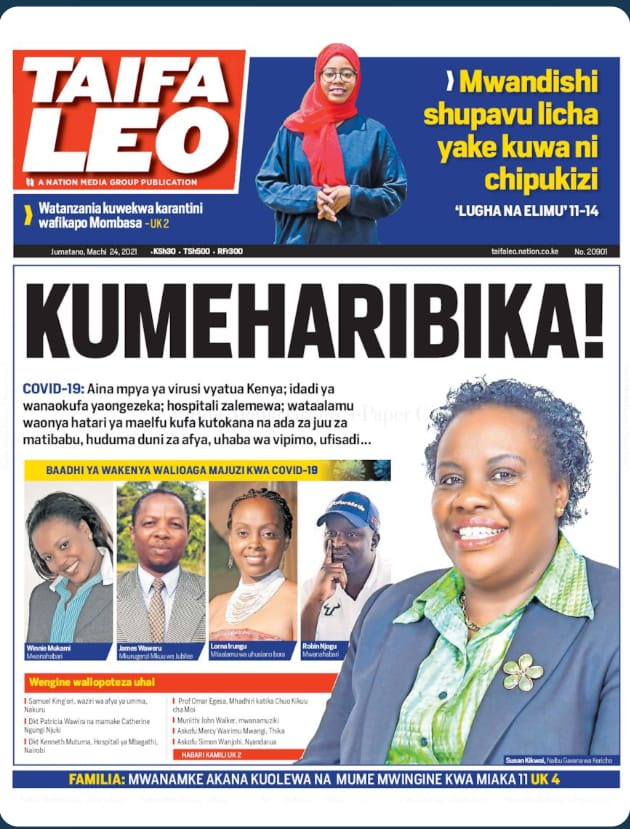 The Covid situation in Kenya is being worsened by high medical fees at the facilities treating the virus hence making it hard for low earning Kenyans to cater for the medical expenses.

In Business daily, it gives statistics of businesses by Kenyans which are expected to be listed in the CRB default list for failure to pay loans they had acquired since Corona pandemic broke into the country. According to the daily Ksh 569 Billion is in hands of Kenyans in terms of loans they had borrowed puting in consideration banks had restructured credit borrowing rates which ended on March 2nd 2021. 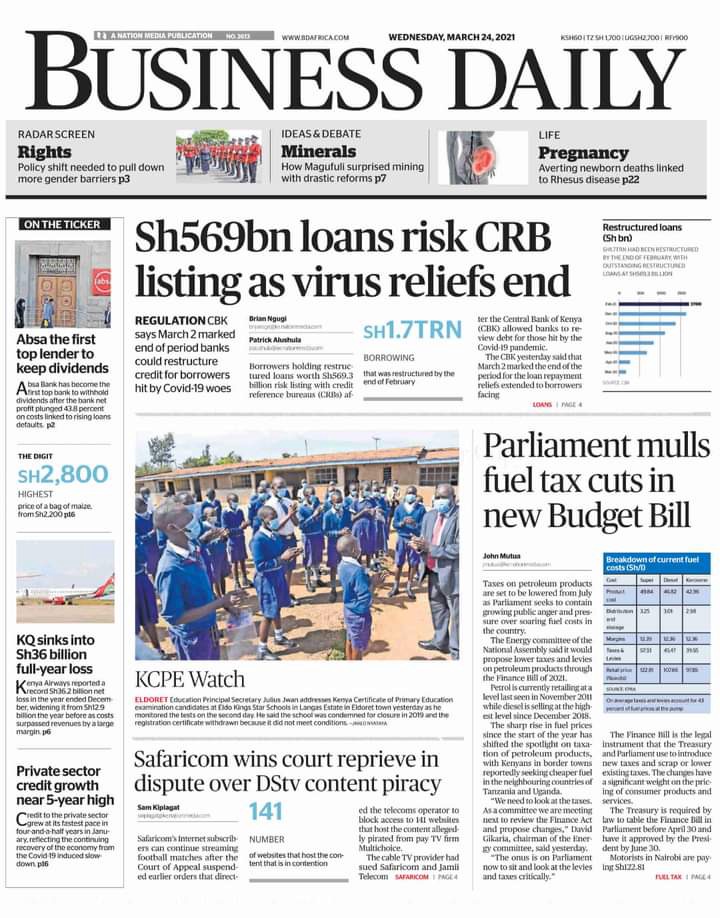 To Amend or not, the big BBI split as whether the parliament has powers to freshly amend the bill after it had been ratified by the county assemblies and subjected into public participation. Some legislators are also seeking for more time to be added as they argued that the committee had sought advise from some experts hence expecting reports from them on contentious issues under some clauses in the bill . 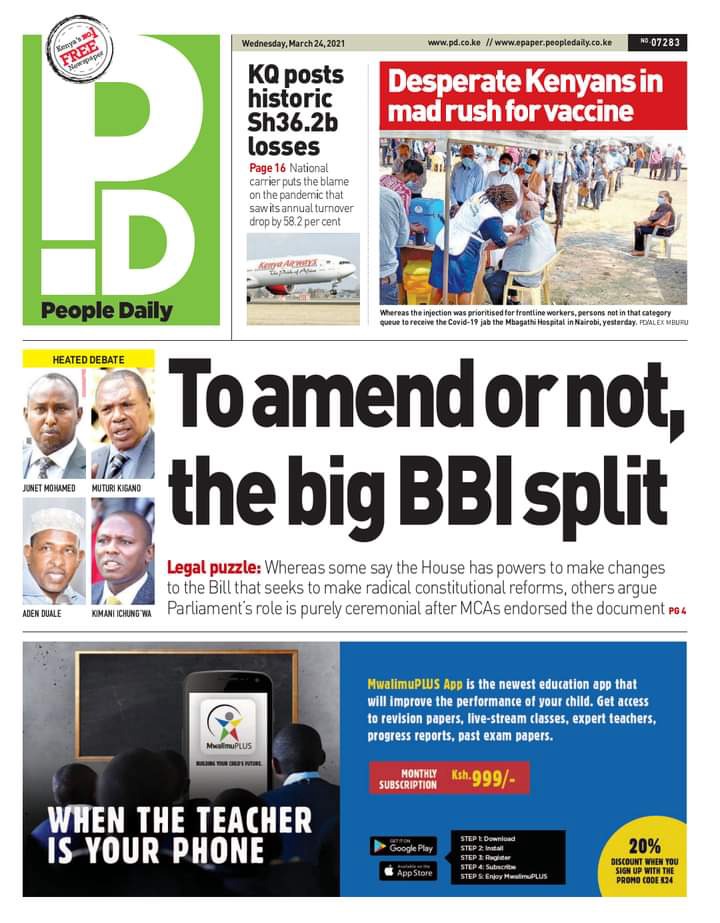 As you grab your paper today, enjoy your reading and have a blessed day ahead.

Distribution of Today's New Cases in Counties and Sub Counties

Advantages And Disadvantages Of Drinking Busaa/Changaa