By Toiwinnien (self meida writer) | 2 months 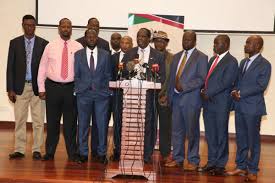 Mombasa Governor Hassan Joho is one of the big-name politicians who is facing a political dilemma. At one point, he hinted that he will be going for Presidency come 2022. Since then, he has remained mum on his future post-Mombasa governorship.

In the neighbouring Kilifi County, Governor Amason Kingi is in a similar position. At just a young age, he has achieved much in politics. However, his political future is hanging on the balance. As to whether he will go for an even bigger seat remains to be seen.

Salim Mvurya, the Governor of Kwale is not safe either as his term comes to an end. His next political move ahead of 2022 could be his make or break moment.

Ahead of 2022, he has made it clear that he will be going for the presidential seat. But with two years to go, it remains to be seen whether he will make it to the ballot or will shelve his ambitions.