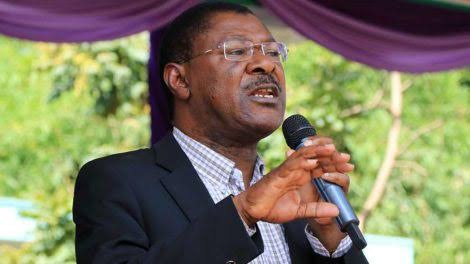 The Bungoma Senator Moses Wetangula has explained why he has to contest for the Bungoma Senate seat despite Deputy President William Ruto promising Amani National Congress (ANC) and Ford Kenya 30 per cent stake in government.

Wetangula has been promised the Speaker of the National Assembly and ANC leader Musalia Mudavadi will become the Prime Cabinet Secretary.

Wetangula while speaking after submitting his papers to defend his senatorial seat explained that he was not after personal gratification but looking after the well-being of his community. He added that the 30 per cent deal is different from his plight to be Senator revealing ANC and Ford Kenya will each be given 3 of the 22 cabinet secretary posts.

"Many people, especially the Azimio La Umoja team, have been asking why I want to defend my seat yet we have shared the government nationally in Kenya Kwanza Alliance. I want to say and repeat here again that am not looking for personal gain nor personal aggrandisement," he said as quoted by the Nation.

Moses Wetangula and Musalia Mudavadi have been tasked by Ruto to deliver 70 per cent of the Western vote in order to benefit from the thirty per cent share of government if Ruto wins.

I Can Never Attack An ODM Candidate, Millie Odhiambo Says Amid Accusations of Bad Blood With Wanga