By Ryndy (self media writer) | 3 months ago

Countable days after the United Democratic Alliance (UDA) national chairperson Johnson Muthama hinted of a looming plan for the political parties forming President William Ruto's Kenya Kwanza Alliance to dissolve and join UDA, a section officials from some of the parties have poured cold water on the idea.

Even though Muthama said that the dissolution would be voluntary before the 2027 elections, it was his desire to have a strong UDA party, and that would amount to dissolving the other parties in the KKA team.

As quoted by the Nation on Monday, the Democratic Party national chairman Esau Kioni said he was not of that idea, as that amounts to returning the country in to a one party state, adding that joining UDA will mean that they lose the rights to express their divergent views.

"It will be like taking us back to the old days. Folding to join UDA party is not possible because it will bring to an end the culture of talking to each other." 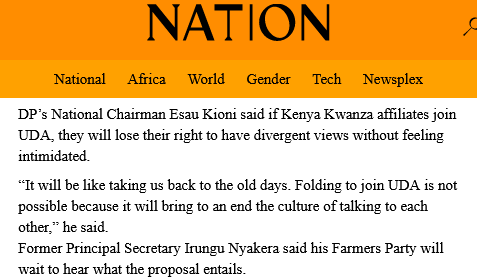 The Farmers Party boss Irungu Nyakera said that he had heard of such discussions, but added that he will wait to know what the proposal entails.

Maendeleo Chap Chap official and Kibwezi West Member of Parliament Mwengi Mutuse noted that the Alfred Mutua's party is not aware of such a plan, but noted that if it was to take place, proper structures will have to be used.

Bungoma Woman Representative Catherine Wambilianga, and who is the Ford Kenya's chairperson said that the idea is premature and if there are any details on the same will be made public in due time.