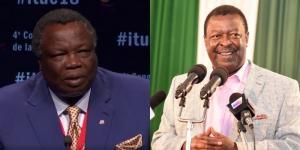 The Central Organisation of Trade Unions (COTU) Secretary-General, Francis Atwoli, has revealed why he does not support Musalia Mudavadi's presidential bid despite his remarkable background in economics.

While addressing the media in Mombasa County on Sunday, November 5, the COTU boss stated that Mudavadi's economic reforms would hurt many businesses in the event that he is elected president.

Atwoli stated that the former Finance Minister in the Moi administration would be focused on growing the economy at the expense of the needs of many employees.

"When he takes over this country he will frustrate many business people to see that the economy he keeps talking about grows,"

"He will compromise businesses, employment, and other things to squeeze people in order to grow the economy. For those who have studied economics, there will be no circulation of money," Atwoli claimed.

The COTU boss also stated that many people would lose their jobs citing legislation that Mudavadi proposed in 1994 that saw many employees within government institutions lose their jobs.

"Musalia Mudavadi comes from my place and in 1994 he is the one who brought the redundancy clause to the Finance Bill. He walks slowly like somebody who does not know what he is doing," he stated.

Atwoli further hit out at the One Kenya Alliance (OKA) principal's presidential bid arguing that former Vice President Kalonzo Musyoka was more calculative politically and stood a better chance in the forthcoming polls.

"Those people who will be left in the dark are my tribesmen, Mudavadi, and Wetangula. For the others, things will be different. If they are not careful they will; be left alone," Atwoli claimed.

The sentiments by the trade unionist come barely days after he announced that he will declare the presidential candidate for the Luhya community on December 31, amidst criticism from the two OKA principals.

“I have already said that on December 31, the Luhya community will emerge at Bukhungu stadium to determine and to listen to Luhya leaders and plan a sense of direction as to who should lead us among the people who have declared their candidacy,” Atwoli stated then.