By RIFT.VALLEY.NEWS (self meida writer) | 24 days 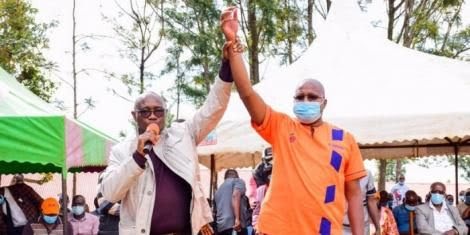 Opore was supported by Interior CS Fred Matiang'i who is perceived to be testing waters ahead of the 2022 General Elections.

In Juja, chaos ensued in the tallying centre after both Jubilee and PEP agents accused each other of election fraud. Police officers took over the hall and chased away agents as IEBC suspended vote tallying for a few hours.

In videos seen by Kenyans.co.ke, Kiharu MP Ndndi Nyoro (PEP agent) and Kiambu Governor James Nyoro (Jubilee's agent) could be seen hurling insults at IEBC officials while condemning the vote tallying process. Nyoro was further manhandled by the police who attempted to restore sanity in the hall.

Murang'a Senator, Irungu Kang'ata had alleged that the police shot in the air prior to IEBC counting the votes.

The Juja by-election is a fight between PEP under Gatundu South MP Moses Kuria and Jubilee led by President Uhuru Kenyatta. Earlier, tallying had given PEPs George Koimburi an early lead against Jubilee's Susan Njeri Waititu, the widow of the late area MP Francis 'Wakapee' Waititu.

Uhuru's popularity in Mt Kenya region is on the test especially after a section of the area leaders opposed his Building Bridges Initiative (BBI).

A loss for Jubilee would dent Uhuru's hope of uniting the region, especially after the High Court declared the BBI initiative null and void.

Deputy President William Ruto, in a vivid attack on Uhuru and Odinga, lauded his teams for the wins stating that," We thank God for Hustler nation victory in Juja (not yet declared) & Rurii and the awesome show in Bonchari. A big congratulations to all our hustler teams for a sterling performance against all odds.

"Hongera to our competitors, let's keep it issue-based and pull together. Let us now focus on the Big 4 Agenda and economic recovery."