Nominated Mp's Son Shoots Himself With His Fathers Gun

By Koechii (self media writer) | 3 months ago 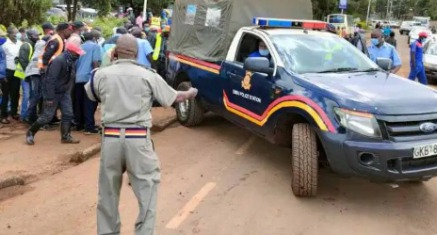 In Narok County, Ewaso Nyiro, the nominated Member of Parliament Ole Sankok’s son has shot himself dead using his own father’s gun.

The boy was a student at Maseno boy’s high school in Kisumu County. He was a candidate show was supposed to sit for his final national examinations come December.

After the shooting incident. The DCI visited the crime site start off their investigations. Speaking g to the media, the CCIO Mwenda Thaiba confirmed that the shooting really occurred at the nominated member of parliamnt’s home.

“From the preliminary investigation, we have established that the boy was meant to go back to school last week but he did not. He spent the money that he was given for shopping to come back home. “Reported Thaiba.

The student appeared not to have wanted to go back to school. His parents had gotten everything ready in preparation for his departure to school but on getting to the School area, he used the pocket money to get a bus home.

The boy is the first born child in the family. The reason why he took his own life by blowing his brains off are not yet clear. The police are still conducting investigations to find out what exactly could have transpired that this boy could no longer take in to the point that he decided that the only option was to take his own life.

His father, the nominated member of parliament of Narok county David Ole Sanko was not home at the time when the incident occurred. He was only called later to be informed that his son had found his gun that he was supposed to have securely kept from children’s reach to shoot himself and take his own life.

The body was taken to the mortuary as the police continue to conduct investigations on what might have made the boy to take his life.

Rare Photos Of Idah Odinga & Rachel Ruto, One Of Them Is Possibly Going To Be The Next First Lady

JUST IN: Kenya Kwanza Makes Preparations at CUEA While Azimio Does The Same at KICC [Photos]