Riftvalley is perceived to be the Deputy President William Ruto's backyard. His UDA Party is also currently dominant in the region. Majority of the elected leaders in the region are in either or UDA and Kenya Kwanza Alliance. However, there are some vocal leaders in the region who failed to join Ruto's camp namely Gideon Moi, John Lonyangapuo, Alex Tolgos among others. 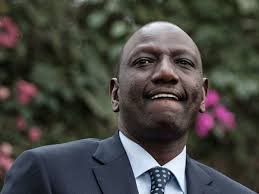 In West Pokot county Gubernatorial race, former Governor Simon Kachapin has made a comeback. He is seeking to unseat the incumbent governor John Lonyangapuo using UDA. Lonyangapuo is vying using his KUP party to defend his seat.

Even though UDA is dominant in the Riftvalley, it will be difficult for Kachapin to unseat Lonyangapuo. It's alleged that the incumbent Governor has made himself and will not depend on any endorsement to win the seat.

The latest opinion poll released by Mizani Africa shows that if election would be held today then Lonyangapuo could win with a landslide.The opinion poll shows that Lonyangapuo could garner 52.6% of the total vote cast. His main competitor Simon Kachapin of UDA could be second with 41.7%. The current Deputy Governor Nicholas Owon Atundon could become third with 3.2% as the undecided voters were 2.5%. 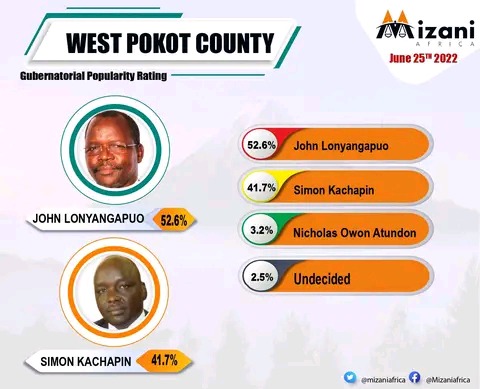 In my opinion, UDA candidate Simon is likely to be beaten by Lonyangapuo of KUP in West Pokot which is perceived to be Ruto's stronghold in the August poll. Follow me for more great news and opinion articles and don't forget to like, share and comment.