By UpdateNews.com (self media writer) | 9 months ago 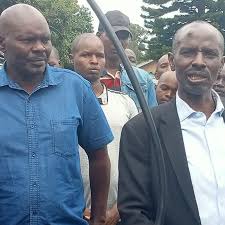 2022 polls are taking shape and leadres are now focusing on August polls to secure their seats in the next parliament. However, Most of the leaders broke the silence after the UDA party nominations as they revealed that it was not free and fair, and most of those who lost the battle have declared that they will be vying in 2022 polls using an independent party.

However, ODM nominated MP Wilson Sossion and Christopher Langat have declared their final stand after rejecting the UDA party nominations citing that it was not free and fair. The agreement between the two leaders revealed that they have joined hands together and they will endorse one candidate who will vie senatorial race using the independent party. He revealed that they have decided to work together to protect the sovereignty of the people of Bomet and also resources.

"Senator Christopher and I will produce one candidate ahead of 2022 polls. The deal is agreed and closed," Sossion wrote on his Facebook page.