By OurWorldPolitics (self media writer) | 1 year ago 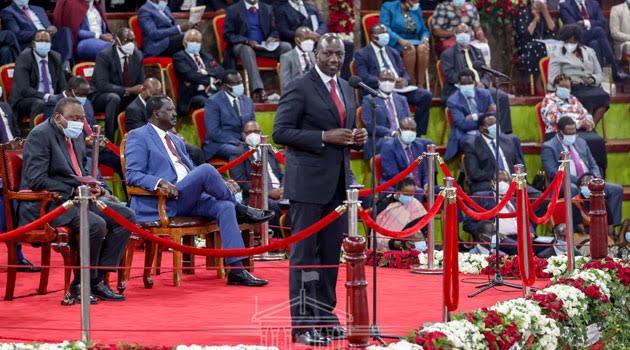 The deputy president William Ruto seems to have outwitted his boss president Uhuru Kenyatta and the odm party chief Raila Odinga after the court ruled against the constitutional amendment process (BBI). When president Uhuru Kenyatta did a handshake with Raila Odinga in 2018, William Ruto knew something was cooking. The Dp must have known that the motive behind the handshake was not good for him.

Before Kenyans knew, the handshake gave birth to the Building Bridges Initiative which just came to an end on Friday 20th August. The deputy president was not a fan of the Initiative and severally told the pro-BBI team to slow down or else the BBI Reggae will have to stop.

What many Kenyans are still asking themselves is how William Ruto managed to Outwit these two gentlemen in their own game? In my considered opinion, the deputy president is a very shrewd politician and the following must have been his tactics he used to bring the BBI down.

The first thing that the deputy president did was to read the mood of the country. The mood of the country was that the BBI was not a priority. But those pushing for the BBI were pushing it as if it were the priority. When covid-19 came, it was the golden opportunity for the Dp. The pandemic affected the lives of Kenyans. People were dealing with covid and unemployment.

He therefore went out to people and told them that for him he wants to deal with the immediate problems facing them rather than the BBI which was not a priority. He suggested that they give priority to covid rather than constitutional amendment. By the time Raila and president Uhuru were realizing, it was already late.

The second strategy which I saw worked for him was messaging and propaganda. The people pushing for BBI did a great damage to the process. In my view, they never understood the importance of messaging and communication. At sometimes you would ask the proponents of BBI about the benefits of BBI and they would not explain.

When they published the bill, they never bothered to issue booklets to Kenyans and by the time they were doing it, it was already too late. The Dp was very clear on his messaging. That these people want to create leadership positions for themselves and when you look st the proposal, you would see the position of the president, deputy, prime minister and the deputy. Therefore Kenyans swallowed the sweet propaganda of the deputy president effortlessly. He therefore managed to outwit the two brothers.

Despite being advised not to attend, the Dp decided to attend and deliver a message meant for those who were not in that hall. He took the podium and NY the time he was leaving, he had questioned every other thing that other Kenyans were asking. For instance when you create the position of prime minister and two deputies, how would that bring inclusivity? The proponents never bothered to explain. At the end of the day, the limelight was about the Dp instead of the BBI function.

Am very certain that if someone from the BBI proponents had made an attempt to reach out to the civil society and involve them in the BBI process, they would have supported the constitutional changes. The Dp realized that, and therefore reach out to them through David Ndii and Nelson Havi. These guys brought the civil society together hence brought the BBI process to an end. I strongly believe that he must have funded the process of stopping the process because let's face it, who is celebrating now?

I don't know what you think but that's my take. Do you think Raila Odinga has another chance ahead of the 2022 general elections now that William Ruto, through the courts has stopped the BBI process? Leave your comment below and remember to click the follow button and share this article.

Wedding dresses to opt for instead of the normal white dress

PHOTOS: Here are the Some of 10 MP's Who Joined Kenya Kwanza Camp Led by President-elect Dr. Ruto

How To Make Delicious And Soft Layered Chapati

Here is how court Ruled on IEBC Quorum During BBI

What the Court Ruled on IEBC Quorum During BBI