The truth behind Why Media Houses Have Different Presidential Results

By Jtany-news-Kenya (self media writer) | 1 month ago

Kenyans have been perplexed as to why there are disparities in the results of the presidential election reported by various media outlets. For instance, according to NTV Kenya's findings, William Samoei Ruto is in the lead, followed by Raila Amollo Odinga, George Wajackoyah, and Waihiga Mwaure. 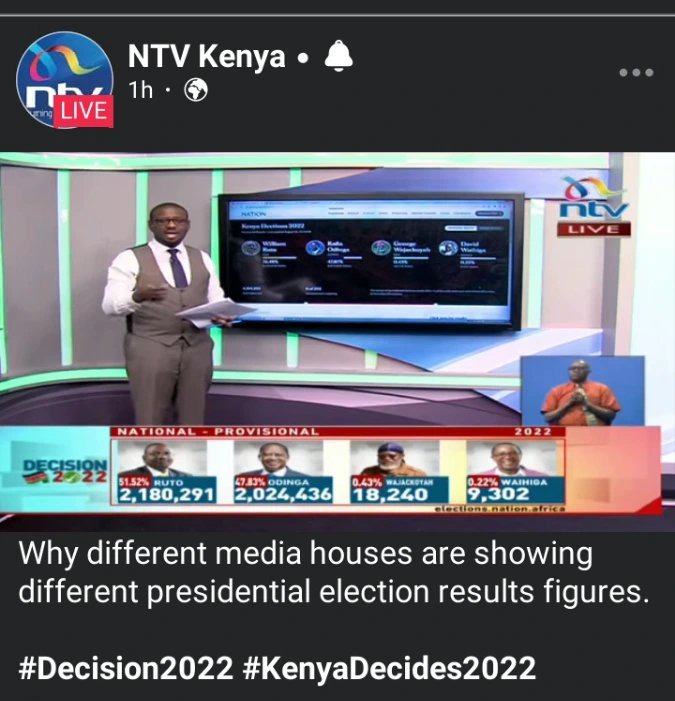 On the other hand, the results from citizen TV place Raila Amollo Odinga in the lead, followed by William Samoei Ruto, George Wajackoyah, and Waihiga Mwaure. As citizens wonder which results are trustworthy, this discrepancy in the outcomes has raised eyebrows.

Since the vote-counting process began on Tuesday night, August 9, after polls had closed, media outlets in Kenya have been presenting various preliminary presidential results. Less than 5 million of the 14.2 million votes that were cast on Tuesday had been counted as of the second day of the counting, according to the startling statistics displayed on displays and websites from various media outlets. 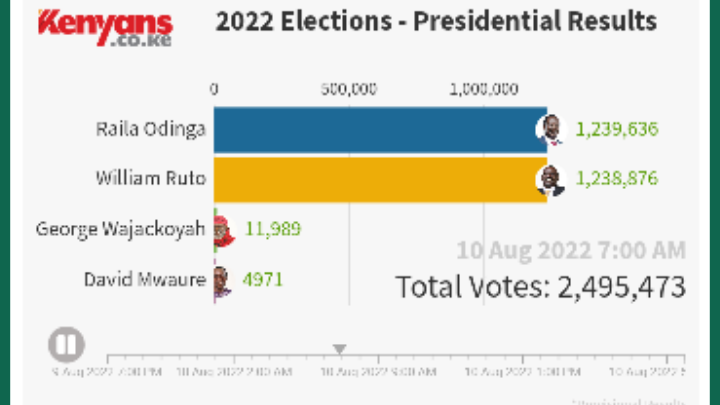 At the time this story was published, Raila Odinga, the flag bearer for Azimio La Umoja, was leading with 2.4 million votes, closely followed by his primary rival, Deputy President William Ruto, who had 2.1 million votes.

Before putting the data on the screen, each media house selects From 34As from the IEBC webpage and curates the information. Due to the amount of tallying clerks, some media outlets in this situation are faster than others.

Other media outlets have multiple stages of verification in place to prevent instances of erroneous or conflicting data. Yvonne Okwara, a seasoned journalist, claimed that Citizen TV's stats looked to be distinct from those of other media outlets due to their punctuality and acute data analysis before signing off the screen after many hours of research and coverage of the electoral process.