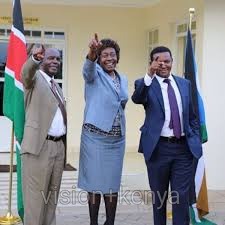 Though the regions that had existed before were disbanded to be replaced by the devolved government, regional politics still have a vital role that they play in politics, almost every region in Kenya have their own regional kingpin who had a commanding power to his people during each an every election in Kenya. For instance President Uhuru Kenyatta has been the kingpin of Mount Kenya region, Raila Amollo Odinga of Nyanza region, Kalonzo Musyoka of The Eastern region, Musalia Mudavadi of Western region among other regional bigwigs.

Kalonzo Musyoka has been the political spokesman of the Eastern region or rather the Kamba nation over the past years, in 2013 and 2017 general elections as the running mate of Raila Odinga he ensured that the region's votes were only preserved for Raila.

But as human beings we are of season today we have the command tomorrow it will wane as a result of aging therefore, we look at the possible Ukambani kingpin when Kalonzo's command shall wane. According to normalcy of politics, politicians are self made and later embraced thus for my opinion the incumbent Machakos governor Alfred Mutua will be the next Kamba Kingpin. Alfred Mutua's age is favourable for him to take the leadership mantle because by now he is 50 years of age and he has served in top government positions.