At the State House, Joseph Kinyua presides over his own succession

By Engineer_Alexmuindi (self media writer) | 3 months ago 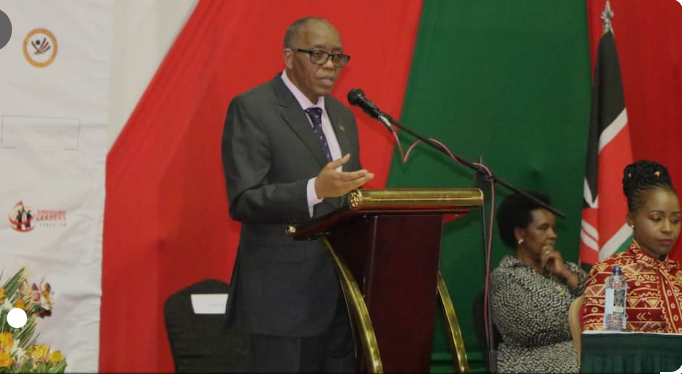 Various CSs took the oath of office and began their duties at the occasion, which was held at the State House Nairobi. Traditionally, the chief of staff and head of public service coordinate the ceremony; in this occasion, Joseph Kinyua took the podium to do so.

However, there was a bright spot as Kinyua presided over the inauguration of his successor, Felix Koskei. Kinyua handed over the responsibility of coordinating the function immediately after Koskei took his oath of office, while the crowd applauded.

"It has been both an honor and a humbling trip. I am deeply grateful for the rare opportunity to serve Kenya and the outstanding individuals picked by the Kenyan people to be the presidents of this country and govern it. Please allow me, sir, to invite my successor, Mr Koskei, to proceed with the day's business "Kinyua stated as the audience applauded.

Kinyua, a government veteran, thanked the president and his predecessors for the opportunity to serve Kenyans.

He served in both prior administrations, including those of the late Daniel Moi, Mwai Kibaki, and Uhuru Kenyatta.

"With this final act, I pass the baton of public service coordination to a new generation of civil employees. I thank you and your predecessors for giving me the opportunity to work in four successful administrations, the second, third, and fourth, as well as yours "He said.

Content created and supplied by: Engineer_Alexmuindi (via Opera News )