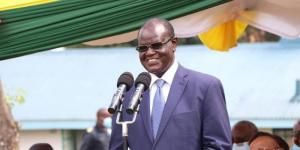 Meru Governor and veteran politician, Kiraitu Murungi, has asked political leaders not to be in a hurry to team up either with the Orange Democratic Movement (ODM) leader, Raila Odinga, and Deputy President William Ruto.

Speaking at a function on Tuesday, January 25, the Meru County boss argued that joining DP Ruto or Raila without doing proper analysis would result in disappointment.

Kiraitu noted that leaders who are interested in different seats make a lot of promises in the run-up to the elections but fail to deliver once elected.

"You will be called for many meetings, this is the season for making promises, people had high hopes but have you seen what happened?" he posed.

Kiraitu revealed that in 2013, he refused to join The National Alliance (TNA) while Meru Senator Mithika Linturi did. He explained that things did not go well for those who folded their parties since they were deceived.

"In 2013, we had the Bus party. Mithika and Kareke Mbiuki teamed up and joined TNA saying our Bus has no wheels. They got into government. However, they got stuck and we had to help them," he stated.

Further, Kiraitu explained that he was among the people who were asked to fold their parties and join Jubilee but were later shortchanged.

"In 2017, Linturi and I were in Jubilee. We were among the founders of the party. It was a very big party because we had to collapse thirteen parties. At the time, we had President Uhuru Kenyatta and Ruto.

"Jubilee only held one meeting in Kasarani when I announced that Uhuru is the party leader of Jubilee and William Ruto as his deputy. Since then, they have never called us for another meeting, they say once bitten twice shy," Kiraitu remarked.

On November 27, 2021, Kiraitu launched the Devolution Empowerment Party (DEP) and revealed that it will give the Meru people bargaining power.

Speaking during the launch at the Bomas of Kenya, the Governor stated that the space for big parties is shrinking and time for coalitions is ripe.

“It is time for us as a country to accept the reality of our political future of coalition governments like the case in Germany. Political parties are necessary and DEP is our vehicle for articulating our own interests,” he asserted.

My Husband Eloped With Another Woman And Left me With 3 children. Our Lives Hav Been Miserable;Jane.

Golden Advice For The Form One Students