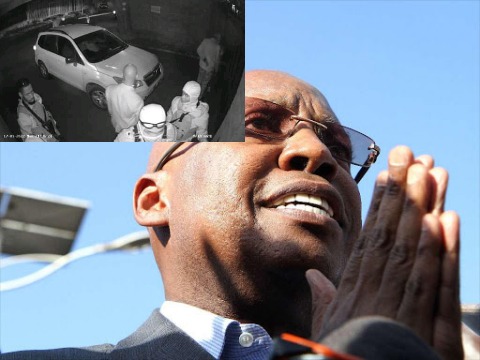 Following the raid, Wanjigi who is a 2022 presidential aspirant has issued a statement through a phone call to Citizen Tv. Wanjigi disclosed that when the officers dressed in white showed up at his gate, they refused to talk to lawyers and demanded to see him. Wanjigi took a firm stand and demanded that the officers speak to two lawyers who had arrived at the offices. When they failed to get him, the offices communicated that Wanjigi should present himself at DCI headquarters to record a statement today.

Responding to the incident, Wanjigi said that what is happening now is political just as it happened in 2017. Wanjigi accused president Kenyatta's goverment of trying to demean democracy and soil the constitution alleging that he has had many battles with the state many of which he has won. " What do they want now? " he asked.

Wanjigi said that the raid has something to do with what over the weekend when he attended Wiper's/ Kalonzo Musyoka's event at his Yatta home. " They know the kind of campaigns am planning that's why they're coming after me,"he claimed. Jimmy promised Kalonzo to quit ODM and join Wiper should he fail to secure ODM's ticket.

"I don't which statement they want me to record but they should know that my intentions are very clear, I won't stop", he said.