US Institute of Peace Calls Out IEBC Vice Chair, Cherera For Poor Mathematics

The August General Elections has come and gone with the various leaders being elected while some have been sent packing by the electorate as per the Independent Electoral and Boundaries Commission Returning Officers.

Four Commissioners of the Independent Electoral and Boundaries Commission distanced themselves from the results that were announced by the Chairman of the IEBC, Wafula Chebukati.

The following day, the four commissioners issued a statement accusing Wafula Chebukati of manipulation of the results to favor Deputy President William Ruto and avoid a rerun of the elections.

The four Commissioners led by Vice Chairperson, Julian Cherera were called out by Independent Electoral and Boundaries Commission Chairman Wafula Chebukati saying that they just wanted to force a rerun.

This afternoon, according to the available reliable reports that we have from The United States Institute of Peace, Juliana Cherera and the three Commissioners have been called out for poor mathematics.

This comes after the Vice Chairperson drew widespread criticism from across the board after she said that the number of votes that had been manipulated was 142,000 constituting 0.01%.

The United States Institute of Peace has thus called out Vice Chairperson Juliana Cherera and the three other commissioners for what it has termed as poor mathematics from them following their statement a few days ago. 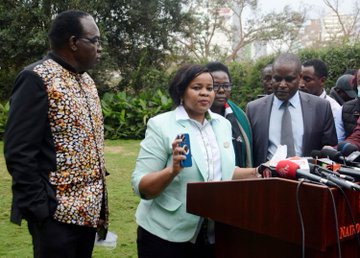 Just In: Quick Move as Ruto Take Interior Department Taken Away From Kindiki To Mudavadi

Gachagua Alleges The Top Office That Will Be Awarded To Raila, Reveals Why He Has Been Silent~Video

''400 Million Has Been Stolen From Siaya County Accounts'' Orengo Explains