Bitter Fall Out As Kalonzo And Muthama Exchange Blows of Words

By Thegoat (self media writer) | 1 year ago 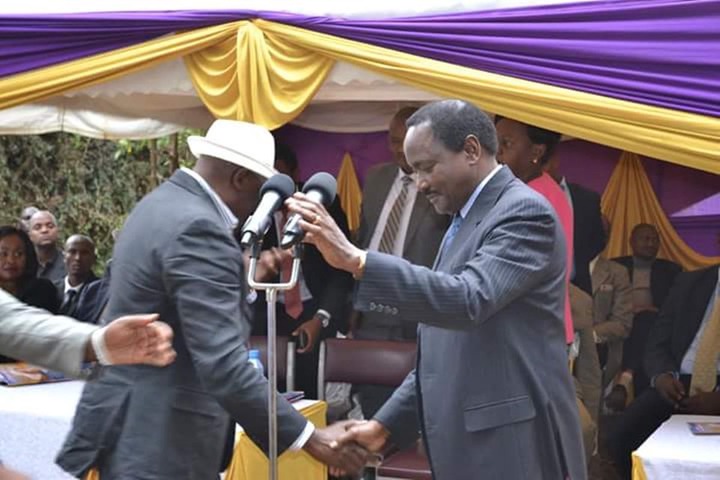 Its been a series of serious attacks and counterattacks between the former Vice President, Kalonzo Musyoka and Machakos Senator, Mr. Johnston Muthama.

At a funeral service attended by both leaders in Machakos County on Friday, the two duos exchanged bitter words with both accusing each other of failing the people of Ukambani.

This being the first time Kalonzo and Mutham met face to face at the funeral of the late Samuel Mutuku who is also the firstborn son to the late veteran politician, Honorable Mulu Mutisya.

Muthama who is now camping at DP Ruto's after his exit from the WIPER Democratic Party is gearing for unity between the DP and Kalonzo.

Media house, K24 television at a news bulletin reports that the former Senator asked the Kamba Community to back the deputy president ahead of 2022 presidential election.

“I want to tell Kalonzo and those cheering him on that presidential campaigns are not conducted the same way village politics are held. Those who are serious about their presidential ambitions, hold huge gatherings in Nairobi, Mombasa and other key regions across Kenya,” he said.

He further added that mounting a spirited presidential campaign needs a lot of funds and proper strategic supporters, something that he believed Kalonzo lacked.

Mathama's statements agitated the former Vice President who has also been accusing the former senator for his political woes in the region. The VP further said, Mr. Muthama has led him twice and he cannot afford to be misled once again.

“Muthama, I won’t allow you to mislead me for a third time. You have failed me on two separate key occasions. This time around, on matters of national politics, I will go to the negotiating table alone. Go tell the deputy president that I will face off against him in the 2022 presidential election,” claimed Musyoka.

It is believed that the squabbles took the center stage of the funeral for a while before the two cooled down. Musyoka has however maintained that he is the man for the top job come 2022.

Kalonzo who recently merged his party with the ruling party, Jubilee, said he has what it takes to move the country forward if elected president in the coming elections.