By E-NewsKe (self meida writer) | 1 months 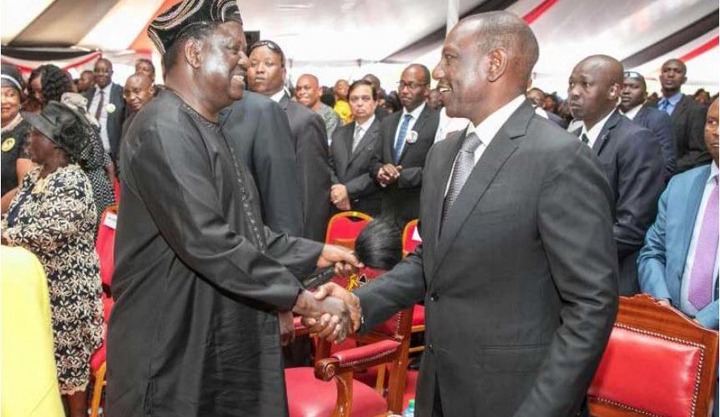 Political leaders in the country are developing conspiracies that can only be compared to playing with each other's lost cards, each trying to overwhelm the other with knowledge especially about the alliances they are aiming for or preferred before the 2022 general election.

According to investigators, the situation has prompted Mr Odinga to hold talks with Deputy President William Ruto through his personal aides to prove to President Kenyatta that he is still a politician in the country who can make unexpected decisions. President Kenyatta's and Mr Odinga's coup d'état seemed to deprive Dr Ruto of access to the presidency. President Kenyatta and Dr Ruto have strongly disagreed and despite claiming to be the God who decides leaders and excludes Dr Ruto from government, President Kenyatta has never publicly announced his support for his deputy. in the 2022 general election.

"ODM believes that there is a broad conspiracy to prevent Mr Odinga from entering the palace proposed by people close to the Authority and we are not sleeping. Our party is the largest in the country at the moment after the Jubilee collapse and we are capable of forgetting the past and forming a coalition that will shake Kenya, ”said one ODM MP who asked not to be named.

On Wednesday last week, it was revealed that Mr Odinga and Dr Ruto had been squabbling after Kakamega Governor met with Deputy President in the Narok area and the next day, submitted a report to Mr Odinga in Nairobi.

This was a week after Mr Odinga was seen with the President inspecting development projects in Nairobi, a move that analysts said was aimed at calming the ODM leader from joining Dr Ruto. Circles say that, after the President found out that Odinga had sent Oparanya to meet Dr Ruto, President Kenyatta phoned him.

Analysts say there is every indication of a conspiracy to disrupt Mr Odinga's West and Coast strongholds in order to deprive him of the ability to form a strong alliance that could confront the One Kenya Alliance.

However, in the One Kenya Alliance, there is no transparency about the plans of the respective leaders as everyone insists they will run for the presidency.

According to political analysts, it is not surprising that the leaders appear together during the day while at night they go to consult with others about other alliances.

"There are a lot of tricks going on among the political elites about 2022. The real situation will be clear from August this year. At the moment, political leaders are brainstorming and even the power of adherence, ”says political analyst Simon Waruinge.

ODM Secretary-General Edwin Sifuna's statement that ODM, which is planning a coalition even if it will have its own political rivals, intensified the debate over Mr Odinga's alliance with Dr Ruto.

Dr Ruto is said to be playing his part despite attempting to form a political coalition with the ODM.

His allies, especially from Mount Kenya, where he has made a name for himself, have advised him that joining Mr Odinga will deprive him of local votes.

According to political analyst Martin Andati, by throwing a bait at Ruto, Mr Odinga wants to intimidate his allies in the NASA alliance which is part of the One Kenya Alliance and also its counterpart.

However, Bahati MP Kimani Ngunjiri says that Dr Ruto has no intention of joining Mr Odinga as a sign that he is undergoing a mental test.