By Isaacs (self media writer) | 8 months ago 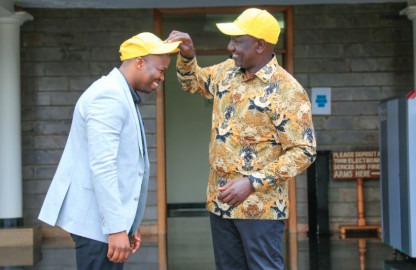 MC Jesse said in an Instagram post on Wednesday that he moved on following an invitation from DP Ruto and advice from his people.

Comedians and corporate presenters will compete for seats in the South Imenti Council in the upcoming elections for UDA party votes.

“Now it is clear where the vision is going. After several days of consultative meetings with South Imenti staff, I was officially invited to join UDA. The work is ultimately up to the winning team,” said MC Jessie.

“When the scammers called and invited me, I had to heed the call of my people and the call to join the winning team. And start working on rethinking Southern Imenti now.”

MC Jessie, who officially announced her candidacy last November, said he was the right person to give the voters a new face.

The comedian added his name to the legislative race to replace South Imenti MP Katuri Murungi, who has been in power since 2013. ticket.

Content created and supplied by: Isaacs (via Opera News )

Babu Owino Reactions After This Photo Of Matiangi Circulated Online

The Big Position Raila's Brother is Now Fighting For in Parliament

It is Over, Ngunjiri Wambugu Reacts After President Ruto Meets Government Officials

The Seven Parameters Ruto is Reportedly Using to Choose His Ministers