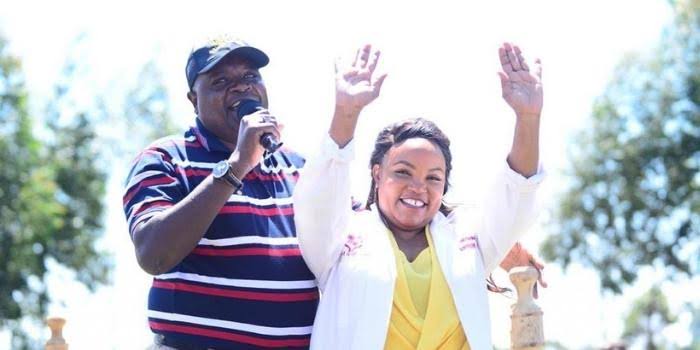 General Andrew Peter Ngirici has announced that they will be pulling all their billboards from Kirinyaga for the next seven days ahead of the much anticipated Mashujaa Day Celebrations.

According to him, this will be in respect of the last Mashujaa Day Celebrations that will be under His Excellency the Head of State president Uhuru Kenyatta.

President Uhuru Kenyatta will be finishing his term in August next year and hence it means that in October next year, Kenya will be under another president all together. 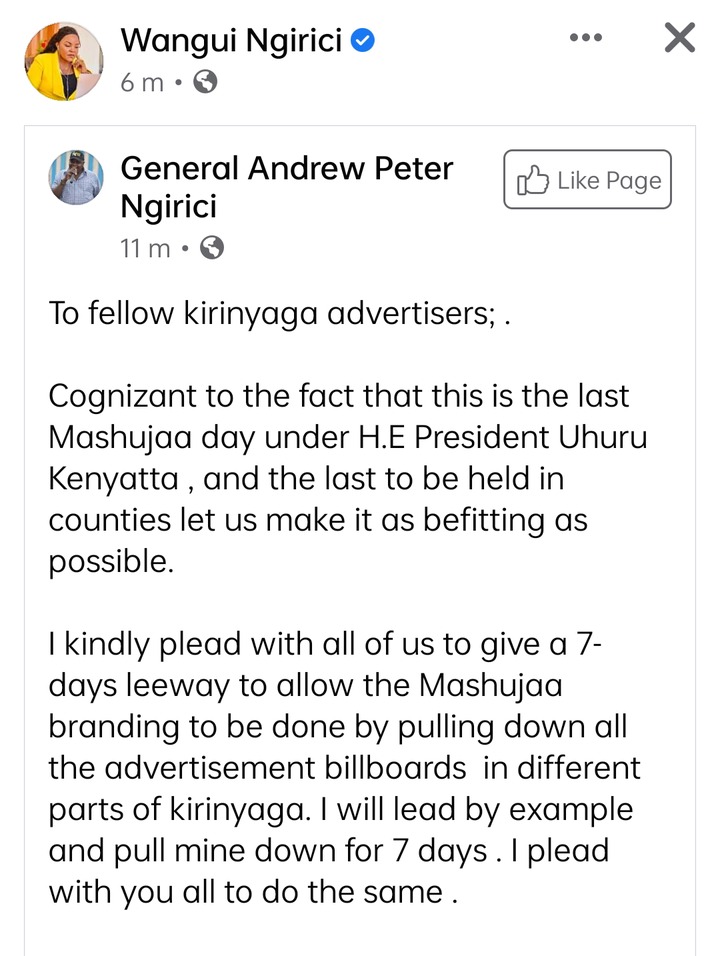 "Cognizant to the fact that this is the last Mashujaa day under H.E President Uhuru Kenyatta , and the last to be held in counties let us make it as befitting as possible. I kindly plead with all of us to give a 7- days leeway to allow the Mashujaa branding to be done by pulling down all the advertisement billboards in different parts of kirinyaga. I will lead by example and pull mine down for 7 days . I plead with you all to do the same..."Andrews Peter Ngirici.

This comes at a time when government's move to declare October 10 Utamanduni Day without organizing a national celebration has been described as futile.

When the Cabinet Secretary in charge of the Ministry of Interior, Dr Fred Matiang’i announced, last week, that today is a day off to cover October 10 which took place yesterday, he urged Kenyans to celebrate Culture Day in a way that maintains national unity and harmony.

The government was set to be a model by organizing a two-day national exhibition where representatives from all communities in the country would meet.

Similar exhibitions were also to be held in all 47 counties to provide opportunities for different communities, their traditions, customs and history.

Cultural celebrations should be celebrated for two days because this is the first time that day has been celebrated in this country.

As the August 9, 2022 General Election approaches, Kenyans should use yesterday to educate themselves about the culture of other communities.

Awareness of the traditions and customs of other communities is one way to bring harmony to the country.

President Kenyatta, who has been reiterating that he aims to keep Kenyans united after retiring next year, would use the exhibition to preach unity and solidarity in the country.

In 2019, the Cabinet approved October 10 as Labor Day and ‘Boxing Dei’ - which is celebrated on December 26 after Christmas - as a Cult.

President Kenya urged Kenyans to celebrate Boxing Dei based on African traditions instead of following foreign customs without knowing the meaning.

But it seems the government has changed and now Culture Day will be celebrated on October 10 and December 26 will be Dei Service.

The Most Powerful Prayers In This world

Officials at Office of the Deputy President Fire Back as CS Matiangi, ODM Turn Guns on DP Ruto

“My Daughters Were Accused Of Being In Illuminati” Akothe Opens Up

Amira Snubs Her Hubby Jamal Marlow, Says She Only Misses Their Kids While She's Away Vacationing