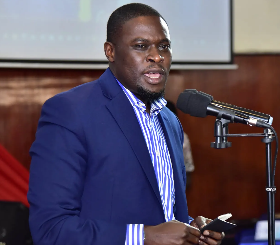 Nairobi city County Senator Johnson Sakaja has called upon the residents of Nyamira County and the country at large to support Amani National Congress Musalia Mudavadi in his presidential bid.

According to a publication by the Star, speaking in Nyamira after accompanying Mudavadi to a church service and a meet-the people rally, Sakaja said that the former Finance Cabinet Minister is among the few presidential hopefuls who have expressed interest in changing the country's economy, and thus Kenyans should trust him with their votes.

"If you look across, there are very few leaders who are advocating for the country's economic empowerment whereby Musalia Mudavadi is one of them, just read his lips and know that in him, there is a government," he said.

Reports went viral that the alliance had settled on Kalonzo as the suitable flag bearer, a move that has since been dismissed by ANC's die hard and Kakamega Senator Cleophas Malala.

In his speech Mudavadi said that his party will be making a major announcement on Sunday when it will hold its NDC meeting.