By Melkynews (self media writer) | 5 months ago 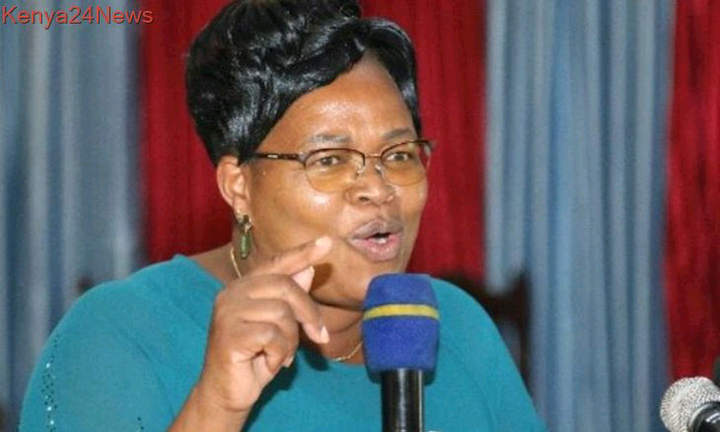 Raila Odinga's Orange Democratic Movement (ODM) issued a public apology to Maragua MP Mary wa Maua and her supporters on Saturday for the harassment she and her supporters received from security personnel stationed at Kasarani stadium during Friday's Azimio la Umoja ceremony.

In the end, Mr. Odinga declared his candidacy for the presidency in the coming 2022 general elections.

"I take this opportunity to officially apologize to Hon wa Maua on behalf of the Orange Democratic Movement (ODM) for the immoral handling and pray that she, together with the good people of Maragua, will accept our apology," Raila stated.

A video of the event went viral, showing the Jubilee MP being shoved aside as she screamed vehemently.

"As an elected official, you're dragging me around like a sack of potatoes?" What if you take over the White House? We seek folks who are humble... Wa Maua is heard protesting as she exits the venue, "You will get me in Murang'a...You will get us in Murang'a."

The statement expressed regret for the harassment and pledged that the party a.nd Mr. Odinga would work together to ensure that such incidents do not occur again.

"We strongly condemn the event in which a member of Parliament was harassed and manhandled by security staEven though that it was primarily an Azimio la Umoja event, our party's leader was the man of the moment.

"As a party, we deplore the heinous incident and pledge to prevent similar occurrences in the future," the statement stated.

The gathering brought together supporters of President Uhuru Kenyatta and those of Raila Odinga.

"Mr. Odinga is a strong supporter of women's rights and empowerment and we (ODM) shall do everything within our power to safeguard, defend, and promote the dignity of women at all times."

Mt Kenya leaders were outraged by the occurrence, which they saw as a blatant assault on the dignity of area women and voters.

ODM Secretary General Edwin Sifuna had already expressed regret for the vent but appeared to blame it on Wa Maua.

"The situation could have been avoided if she had informed us ahead of time that she would be joining us...we've lately got a dozen defectors from the United Democratic Alliance (UDA).

and there's a chance their intentions will be misinterpreted." Mr. Sifuna explains.

All those who claim to be working to unite Kenya must embrace all Kenyans completely, she said, and "make remarks that wholesomely embrace peace, unity, and cohesion from all the corners of their lips."

Wa Maua stayed silent about the incident, stating that she supports "national and international unity as defined by humanity," but not "discrimination acts of groupings."

She stated that she will remain a faithful member of President Kenyatta's ruling Jubilee Party till her five-year term finishes next year.

"I'll then ask the people of Maragua to tell me about their party passions and the kind of relationship they'd like me to establish with them as I seek a new mandate.

"I'm trying to finish up my contract with them, and sideshows aren't going to benefit me or my people," she explained.