By Matha.wendo (self media writer) | 4 months ago 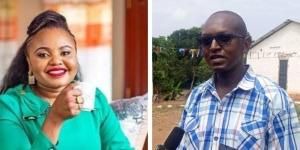 In exactly 195 days, Kenyans will go to the ballot to elect the next leaders who will lead the country's political and development agenda through legislation and policy making.

The August 9, 2022 poll has been dubbed the most competitive in the country's political history and since the advent of multiparty democracy in 1992.

As things stand, the race will pit Deputy President William Ruto of the United Democratic Alliance (UDA) against former Prime Minister and leader of opposition, Raila Odinga. The two are viewed as the front runners in the country's top seat.

The poll has also attracted a plethora of aspirants, from debutants to incumbents to veterans, who are all eyeing various elective seats.

lets takes a look at aspirants who are siblings and eyeing different seats in the much awaited poll.

Mwanaisha Chidzuga and her brother Hassan Chidzuga are the children of former Kwale County Woman Representative, the late Zainab Chidzuga.

What has blossomed over years as an otherwise tight sibling relationship has turned into a sibling rivalry after the two expressed interest in the Matugu Parliamentary seat.

Following the demise of their mother, Mwanaisha declared her interest in the Parliamentary seat, a position his brother had already expressed interest in contesting for.

In a heated spat between the two siblings, Hassan Chidzuga suggested that his sister contests in Garsen, Tana River, where she and her husband, former Member of Parliament Danson Mungata, are registered voters.

"It is impossible for her to cater for the people of Matugu while she is married in Tana River," Hassan Chidzuga stated.

He, however, downplayed reports that the rivalry extended beyond politics, adding that there was no bad blood between the him and his sister.

Emgwen Member of Parliament, Alex Kosgey, and his brother Allan Kosgey will seek to immortalize their father's name in Kenyan politics.

The sons of former Cabinet Minister in the Mwai Kibaki regime, Henry Kosgey, will seek to clinch the top two seats in Nandi County.

While Alex will be seeking the Senatorial seat, his brother Allan, has his eyes set on the gubernatorial seat.

The two have been in politics for nearly three decades, with the former Premier fitting into his father's shoes. He cemented his father's legacy when he became the Prime Minister in the Grand Coalition Government, making him second-in Command to then President, Mwai Kibaki, after the highly contested 2007 elections.

Raila will be making fifth stab at the presidency in the August 9 General Election and goes to the polls as the incumbent President Uhuru Kenyatta's favourite. On the other hand, his brother Oburu, who currently sits in the East African Legislative Assembly (EALA) will seek a political comeback in county politics.

He will be seeking to succeed James Orengo as the Senator for Siaya County.

Just like the Odinga's, Gideon and Raymond Moi, were born into politics. The sons of Kenya's longest serving President, the late Daniel Torotich Arap Moi, did not fall far from the tree.

Gideon took over the mantle from the Senior Moi, having been officially endorsed as his political successor. The Kenya African National Union (KANU) party leader and the second term Baringo Senator, was endorsed by his party to succeed his childhood friend, Uhuru Kenyatta, as the Head of State.

However, Gideon has not expressly announced his contestation for the presidential position or whether he will be teaming up with one of the leading aspirants.

His elder brother, Raymond, is the serving MP for Rongai Constituency in Nakuru County. The soft-spoken Legislator will be defending his parliamentary seat when Kenyans go to the ballot on August 9.

Pius and Michael 'Mayo' Gumo are the sons of former Cabinet Minister, Fred Gumo. Mayo, a businessman who leads a flamboyant life in Nairobi, seeks to fit in his fathers shoes.

The young Gumo has declared interest in the Westlands parliamentary seat. Although, his father severed his relations with the Raila-led party in 2017, Mayo hopes to win the ticket.

On the other hand, Pius has his eyes on rural politics. He will be contesting for the Member of County Assembly (MCA) for Endebess Ward in Trans Nzoia County.

Ford Kenya party leader, Moses Wetangula and his brother, Tim Wanyonyi, add to the list of siblings eyeing elective positions in the 2022 polls.

The two are currently serving Members of Parliament. While Wetangula is the Senator for Bungoma County, his younger brother is the Westlands Constituency Legislator.

The two brothers are seeking bigger roles in the country's leadership. Tim Wanyonyi, will battle it out with Nairobi Senator, Johnson Sakaja and other aspirants for the Nairobi Gubernatorial seat. He hopes to clinch the ODM party ticket.

While the ousted Senate Minority Whip has declared interests to succeed President Uhuru Kenyatta, political pundits opine that he might shelve his quest and defend his senatorial seat or settle for a Cabinet position.

How Raila Odinga And Azimio Brigade Were Welcomed In Bungoma County

Why Ruto, Richathi Candidature Could Be The Perfect Successor To Uhuru Kenyatta's Government.

Opinion: Why Kalonzo Will Be The Decider In The Presidential Race