Kapseret MP Oscar Sudi has come out to name one politician who has allegedly been misleading ODM Party boss Raila Odinga.

Speaking on Thursday when he addressed the press from his Kapseret home, Sudi lashed out at Suna East MP Junet Mohamed, claiming he has been one of Raila Odinga's enemies and burden in Azimio la Umoja camp.

Sudi attacked Junet, claiming he had chased away a number of Raila's wise allies who could have helped the ODM chief circumnavigate the August polls successfully. He said Junet is taking Raila to the political dustbin.

"You should know that you are a burden in Azimio, you are ODM's biggest problem and Raila's big enemy because just talk nonsense every day. You have chased away the few people who had brains and could have helped Babah to push his things forward. They all left you to surround Raila and you are busy taking Raila to political oblivion," stated Sudi. 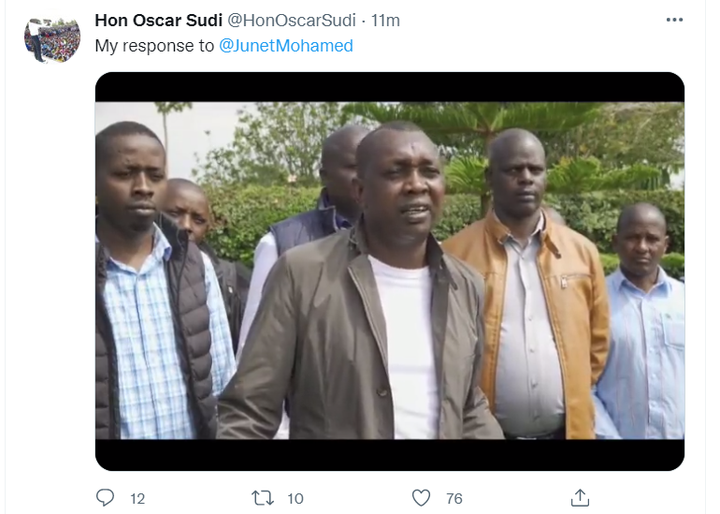 He went ahead to lash out at Junet saying he had confused Raila Odinga, who was once called for the use of an electronic register but has now resorted to the use of a manual register.

Sudi said Azimio and Junet have sensed defeat and that is the reason why they are giving ultimatums to the IEBC.

"You recently said that Wetangula had met with IEBC chairman, you are confusing us because you were bragging the other time claiming you have the system. I don't know whether the system has failed or you are the ones who were lying to Raila. You are now running away from that and misled Raila who was talking about an electronic system the other time but is now forging for a manual. It means you have sensed defeat and the opinion polls you have been using are taking you nowhere," he added.

Babu Owino Break Silence On The Death Of IEBC Officer Who Was Attached To Embakasi East.