Why These Rift Valley politicians might not survive past 2022

By Toiwinnien | self meida writer
Published 17 days ago - 4825 views 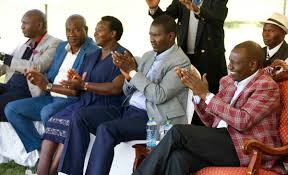 William Ruto Deputy President together with Uasin Gishu Governor Jackson Mandago during the past meeting,the upcoming 2022 general polls is approaching, whereby its coming with its effects and will leave casualties, especially the political class.

In Rift Valley, for example, the elections will mark the end of some vocal figures in the region.

Cherangany Kuttuny the lawmaker is part of the rebellious trio troubling Ruto in the region, the others being Keter and Moiben MP Silas Tiren.His political attacks on the DP having seen him isolated by fellow leaders from Kalenjin community, this is asituation that will make it hard to remain in the political arena in 2022. In the instance he losses in the elections, it could be mark the end of his political relevance.

Nandi Hills lawmaker has rebelled against Deputy President William Ruto who is considered the Rift Valley leader. Keter hit out at the DP. In a region where Ruto decides the way to go, the MP could have it hard recapturing his seat or getting a higher one in 2022 should he fail to reconcile with the DP. This could deny him the platform to air his views as is the case currently, leading to his political dimming and finally a political down fall.

The Governor of Uasin Gishu is among the most vocal leaders iof Rift Valley region, this is the region that has been elevated. However, being on his second and final term, Mandago is expected to exit the politics in 2022 or go for a higher seat,he either go for the top seat or else fail to secure a nomination to a top government slot, then he will end up losing his political options

Cherangany Kuttuny Rift Valley Silas Tiren.His Uasin Gishu William Ruto
Opera News is a free to use platform and the views and opinions expressed herein are solely those of the author and do not represent, reflect or express the views of Opera News. Any/all written content and images displayed are provided by the blogger/author, appear herein as submitted by the blogger/author and are unedited by Opera News. Opera News does not consent to nor does it condone the posting of any content that violates the rights (including the copyrights) of any third party, nor content that may malign, inter alia, any religion, ethnic group, organization, gender, company, or individual. Opera News furthermore does not condone the use of our platform for the purposes encouraging/endorsing hate speech, violation of human rights and/or utterances of a defamatory nature. If the content contained herein violates any of your rights, including those of copyright, and/or violates any the above mentioned factors, you are requested to immediately notify us using via the following email address operanews-external(at)opera.com and/or report the article using the available reporting functionality built into our Platform