Raila Reveals Why He Fired Ruto 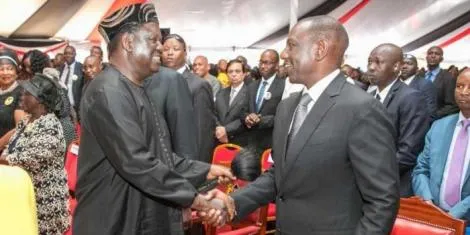 On Sunday, November 28, during a tour of Nairobi County, the former PM accused DP Ruto of having an insatiable desire for public resources.

He went on to say that the DP had no limitations and could frequently dip his hand in the cookie jar, which Raila found repulsive.

"Those that I hired and then stole from. They're banging their chests now since we chased them away. Stupidity, "Raila stated.

He also stated that the DP continued to practice the habit, resulting in a rift with his employer, President Uhuru Kenyatta.

"He spends Ksh100 million in a year, even though we know your salary is only Ksh2 million. Where did you obtain all that cash? We're well aware that you've taken it "Added he.

Raila, who was Prime Minister at the time, removed two ministers in 2011, including DP Ruto, who was in charge of the Higher Education portfolio.

Ruto and then-Agriculture Minister Sam Ongeri were suspended for three months at the time to allow for investigations into their actions before being fired.

The termination followed an inquiry into the Ministries by PricewaterhouseCoopers (PwC) and the International Auditor General.

Ruto was a member of Raila's Orange Democratic Movement (ODM) at the time.

The DP was also caught up in the post-election violence in 2007 when e was charged with crimes against humanity by the International Criminal Court (ICC) in The Hague. Over 1,300 individuals have died as a result of the violence, and over half a million people have been internally displaced.

The DP, on the other hand, has claimed on multiple occasions that he assisted Raila in securing the position of Prime Minister.

How to Start a Second Hand Shoe Business

Always Ahead: Dennis Itumbi Knew DP Ruto Had Appointed Hussein Mohammed as His Head of Communication

The Man Found In A Dutch Airplane Wheel Is A Kenyan