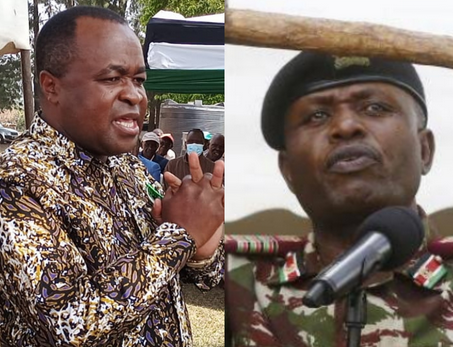 The Democratic Action Party of Kenya, DAP-K's Trans Nzoia gubernatorial aspirant George Natembeya has suffered a major setback days after unveiling Philomena Kapkori as his running mate ahead of the August elections.

According to a report by the Star on Wednesday, Natembeya who will be battling it against Ford Kenya's candidate Chris Wamalwa is between a rock and a hard place after a section of residents threaten to withdraw their support for his bid.

DAP-K is supporting Raila Odinga for presidency under the Azimio La Umoja One Kenya Alliance, while Ford Kenya is under Kenya Kwanza Alliance which is rooting for Deputy President William Ruto's presidency.

The residents led by the Sabaot elders and professionals questioned Natembeya on what he considered before piking Kapkori, claiming that he had dismissed several names they had proposed.

Led by Abraham Kibogi, the professionals argued that the community was not consulted, and that Kapkori's unveiling caught them by a surprise, adding that they now feel isolated and might chant a new political route.

A gender activist identified as Maria Rotich said that the residents are now re-considering their towards Natembeya's bid, a move that was also supported by Sabaot Council of elders chairperson Peter Chemorit.

They revealed that they would throw their support behind Wamalwa if Natembeya does not reconsider his running mate choice.

However, in his defense, Natembeya argued that he subjected all the names that were fronted to him, and only Kapkori emerged as the suitable person who can manage Trans Nzoia since she has more than 20 years of experience in the Finance sector.

3 Words That Are Killing Your Relationship

Photos of William Ruto Ahead of Manifesto Launch Stir Reactions

Kenyans React After Seeing Wajackoya's Classical Set Up For His Manifesto